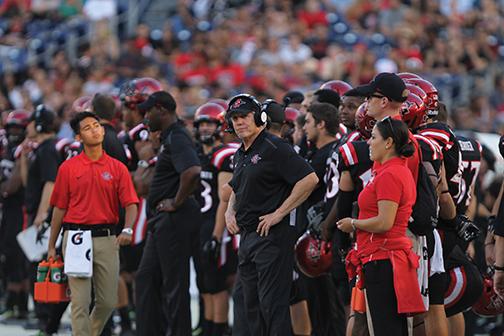 Before my readers plan my funeral, I think the Aztecs are closer to winning the conference than those pundits who picked the team to finish second during the MWC’s Media Days. They chose the easier path, assuming that the Mountain West consists of Boise State University and California State University, Fresno only, and dismissing SDSU’s recent run of success as an aberration.

However, a pro-championship column was assigned to my colleague, Ethan Bailey. My purpose is to come up with reasons why the Aztecs won’t. So, here are three:

With that said, winning the West this year will come down to the Oct. 3 game in Fresno When two equally matched opponents meet, pick the home team. The last time the Aztecs played there was 2012. They lost 52-40.

That year, the Aztecs had a better quarterback in Ryan Katz. This year, Quinn Kaehler reprises his role. Kaehler proved his worth during last season’s magical run to the Famous Idaho Potato Bowl. This year, he isn’t the same. At the time of this writing, Kaehler has only the Northern Arizona game to show for this season, but what I saw in that game is precisely what I saw watching him in practice. Neither he nor Long will tell the public something is wrong, but the accuracy he displayed last year when he threw for 19 touchdowns against only nine interceptions isn’t there.

Whether it’s the residual effect from elbow surgery during the off-season or poor mechanics remains to be seen. Let’s hope it’s the former, because elbow soreness can be overcome easier than poor footwork.

The defense didn’t receive enough credit for last season’s revival. The unit was embarrassed during the first three games, surrendering more than 40 points in the first two games, followed by Oregon State University scoring 34 points. They got it together during conference play, yielding more than 40 points only twice in nine games, despite playing five overtime games in the process.

That defense was the MWC’s fourth best in passing efficiency. They achieved that honor because of strong play from the secondary and linebackers. This year’s squad, though, is a far different story. The safeties are inexperienced and the best linebackers are hurt.
Lost in the eventual rout against Division II Northern Arizona is that the Lumberjacks owned the Aztecs defense after halftime, until linebacker Calvin Munson’s interception took away the Lumberjacks’ will to fight. If a Division II opponent can put the Aztecs on its heels, what will the better gunslingers from the MWC do?

Don’t get me wrong, Aztecs fans. I think the talent on this year’s team is among Long’s best.

That’s why this season will be an interesting, fun-filled journey leading to a fifth consecutive bowl appearance. But for SDSU to win the conference, it’s going to need the safeties to grow up in a hurry, Kaehler to regain last year’s touch, and another strong road game coupled with a perfect home record against conference foes. It’s good, then, that SDSU always believes it will win.

This piece is a part of a pro/con set regarding the Aztec’s upcoming season. Check out Ethan Bailey’s opposing argument here.