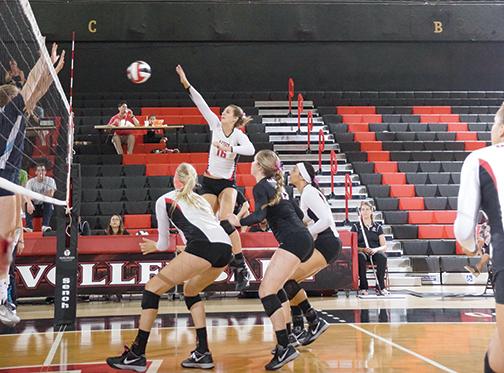 What a difference a week makes.

After losing all three matches in Hawaii, the Aztecs returned home and got their season back on track this weekend at the annual Aztec Invitational. The lady Aztecs beat Brown University, Villanova University and California State University, Fullerton to even their record at 3-3 for the season.

“It was nice we could fight to win and that’s what is important,” head coach Deitre Collins-Parker said. “We definitely did that.”

“I just try to take control of the back row,” Pritchard said. “I talk to everyone and keep the pressure off myself.”

The second set had Villanova leading 16-10 before the Aztecs came roaring back with eight straight points on their way to three point victory. The Aztecs took early leads in both the third and fourth sets to cruise to their second match victory of the weekend.

Senior setter Chloe Mathis recorded her fourth double-double in five matches with an impressive 40 assists and 11 digs. Meanwhile junior outside hitter Halle Aiken and Little led the Aztec charge with 11 kills each.

“We just keep learning and improving in everything that we’re doing,” Collins-Parker said. “It’s nice to be able to call on different people and find out the depth that we have.”

The Titans would start strong and take the first set after jumping out to an 8-2 advantage. The second and third sets featured a great battle between the two schools. The teams kept each other within two points for almost the entirety of both sets.

However, the Aztecs would get the better of the Titans in both sets winning by the slimmest of margins. The final set of the weekend saw the Aztecs pull away and win thanks to a six-point run early on.

Showing strong determination, the Aztecs came back to win against both Villanova and CSF after dropping the crucial first set.

“I felt like we adjusted to what the other team was doing,” Pritchard said. “Once we saw what their strengths were, we came back in the next match and adjusted.”

Up next for the Aztecs will be a challenging match up against cross-town rivals University of San Diego. That match is slated for 6 p.m. on Sept. 16 in Peterson Gym.