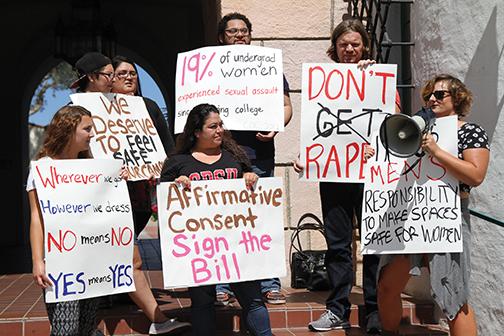 “We saw the crime alerts at the beginning of the year and just decided it was time,” nursing junior Stephanie Tonegato said.

Two sexual assaults were reported to SDSU Police Department in one week this semester, between Sept. 1 and 6.

“Sexual assault at SDSU is a ramped problem,” English senior Douglas Payne said. “I feel like it is an issue that is ignored by a majority of students.”

The California bill would require college students to obtain explicit consent before proceeding with a sexual encounter. Brown must sign the bill by Sept. 30 in order for it to pass.

“Governor Brown has this confirmative consent bill and it is up to him to sign it by the end of the month,” Tonegato said. “We just wanted to be another voice that urged him to sign it.”

Payne said he believes it is important that victims and bystanders to sexual assaults speak up.

“The more people choose to speak up, and the more women choose to be brave and say what happened to them, the less of a problem it is going to be,” Payne said. “It needs to be visible.”