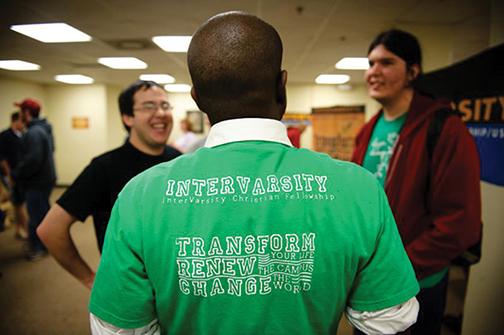 InterVarsity Christian Fellowship, an international Christian group, is a notable club on campus. IVCF requires student leaders to share the same Christian ideal as the club, a practice not condoned by California State Universities, leading to its “derecognition” by all 23 California State Colleges.

What does this mean for San Diego State?  IVCF is denied its right to equal access on campus. This means losing the ability to reserve rooms (their tuition and California tax-dollars pay for), permission to engage in student activities on campus, and any weight with students, faculty and administrators.

SDSU Student Life and Leadership requires clubs to abide by a specific guideline. The Open Membership Agreement, an executive order by CSUs, is the very reason IVCF has been “derecognized.”

CSUs, such as SDSU, always brag about diversity strides, but implementing regulations such as this one undermine the ideals and claimed mission statements.

The argument is if they let one club discriminate, they’re allowing all the other clubs to do so as well. This argument holds little-to-no weight. If one club is going to be derecognized for being discriminatory, all others should also have to follow the same guidelines or face derecognition.

This policy punishes clubs for being selective, but turns a blind eye on the social sororities and fraternities on campus. These organizations are allowed to dismiss this mandate because they’re an exception under Title V, allowing for gender segregation — or as many would call it, discrimination.

Technically speaking, no male would feel comfortable joining a sorority and vice versa.

With that being the case, why would anyone want to join a club not affiliated with their faith, let alone rise in its ranks to leadership roles when they can choose to the join the many other groups on campus?

IVCF doesn’t ban students who aren’t religious from joining the club, like gender exclusions associated with Greek life. IVCF has been wrongly derecognized for reasons that aren’t sound, and certain students agree and are troubled by this recent happening.

Someone who actually believes in the faith would better represent and work bearing the best interests of the group. Being affiliated with a particular faith positively correlates with more practical promotion and education of the club. Conveying messages of the club’s purpose, intention and practices becomes a bit conflicted when the messenger can’t relate. The coalition of religious leaders in this club would be more fitting than an outsider without personal experience or stake in the club.

Even non-Christian students agree with the reasoning of faith-based organizations being led by religious leaders. It seems like common sense, but clearly not to all.

“It would make sense for a religious group to be run by religious people,” journalism sophomore Katie Koach said. “It just makes sense.”

The SDSU InterVarsity Facebook page currently reads “Regardless of what faith background you come from, you are welcome here!” Judging from this message, it’s safe to say the club is still alive and well despite their persecution. IVCF has not lost hope, holding meetings off campus with students from all around the San Diego area to provide a place of worship.

Although this derecognition is a huge slap to the face and an obstacle preventing routine functions such as weekly meetings and school appearances, it’s not successful in stopping the practice of their faith.

Nevertheless, the bureaucracy has once again ruined something as simple as people coming together to practice and share their faith with their school and community.