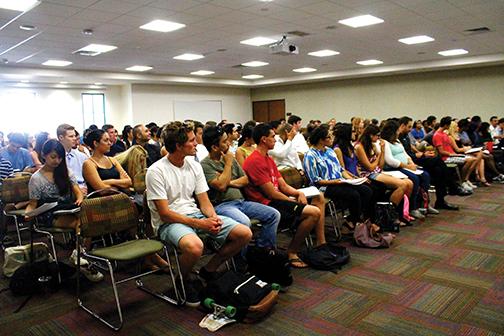 The discussion was led by Randy, one of three agency representatives who hosted the event, none of which disclosed their full names.

Randy, who formerly worked as a National Clandestine Service case officer, described his job for the CIA as more of a lifestyle than a career. His wife is also in the CIA.

The agency requires that candidates be detailed oriented, have good speaking and writing skills and able to work well with others in high-pressure situations. Randy added that adequate social and interpersonal skills are required. Although it’s not mandatory, the CIA prefers students who graduated with a 3.5 GPA or higher and know a foreign language.

The number one question recruiters ask themselves when evaluating candidates is: “Is this somebody I would like to work with in the future?” Randy said.

Alan Remington, a family and child development graduate student, attended the event. He hopes to get his Ph.D. in clinical psychology and work for the CIA in the future. Remington attended the information session last year as well.

“They definitely went into much more detail this time,” he said.

Randy explained that candidates must have the ability to form close personal relationships with the subjects they are assigned.

“We teach you a lot about human psychology,” Randy said. “You learn how to be a different person.”

That training begins after a long process of interviews, a psychological evaluation and a polygraph test. Students learned that thousands apply to the CIA each year and only a few hundred are selected. While the application process is rigorous, there are positions for people with nearly any type of degree.

During the information session one student asked if accounting majors could apply. Randy responded saying the CIA needs people with that type of experience for positions where complex data analysis is involved. Another student inquired about the value of biology degrees and Randy explained that with more training, biology majors could serve as useful assets when dealing with biological warfare.

Some people may mistake the CIA for a law enforcement agency. In reality, Randy said, the mission of the organization is to gather and analyze information in order to allow the U.S. to make the best foreign policy decisions possible.

Another common misconception made about the CIA is that all employees are referred to as agents. There are a wide variety of positions at the agency and the people who are mistakenly called agents are actually operations managers. Their job is to make direct contact with key operatives in the field.

Randy gave this hypothetical example of a standard assignment for an operations manager:

“If you’re assigned to gather intelligence on a particular individual and that individual likes going to the opera, then guess what? You’re going to learn to like the opera,” he said. “It’s about building a relationship and then manipulating the person.”

Matt Hrachovy is a business freshman who attended the information session looking to explore what options were out there for a future career. He said he found it interesting that the CIA representatives in the session were straightforward.

That seemed to be the case when Randy described the job of paramilitary operations officer. This position requires candidates to have 10 years of Special Forces training and three tours of active duty.

Dave, one of the CIA representatives who attended the event, was a former paramilitary operations officer. He said he was responsible for infiltrating high-risk areas and extracting other CIA personnel.

Randy said one of the most enticing aspects of working for the CIA is that, “you can be a part of making history.”

The application process can take up to a year, Randy said, so students should apply between their junior and senior years. To apply, students can visit the CIA’s website.