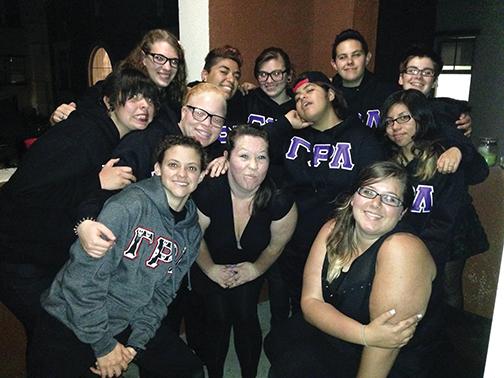 San Diego State is home to many sororities and fraternities that have established years of tradition and culture on campus.

Gamma Rho Lambda is the largest national LGBTQIAA sorority with 13 chapters in the last 10 years, according to its website. GRL’s mission is to provide a safe space on campus for LGBTQ and ally students within the Greek community.

GRL was initiated at SDSU as an interest group on campus in the fall 2013 semester. Since then it has encouraged its members to achieve success through many levels such as social, academic and community-based, according its website.

GRL President Jessica Wright said SDSU students and staff have been accepting of the sorority. Faculty members, such as Director for Student Life and Leadership Randy Timm, have taken the time to help out the organization from time to time.

GRL members are actively involved with most, if not all, LGBTQIAA organizations on campus. They host an event, the Big Queer Barbecue, which happens on a semester basis.

“This sorority has helped me feel comfortable and proud of being bisexual, which is something I had previously felt uncomfortable and embarrassed about because of the societal constraints of where I grew up,” Wright said. She has been a member since 2012.

GRL ultimately wants to establish a safer and more accepting college experience for LGBTQIAA members by providing them with more resources on campus. For students who may be hesitant or curious about rushing, Wright suggests they take a leap of faith and do it especially if they are LGBTQIAA identified.

“GRL was created with the goal of providing a place of belonging for those outside of heteronormative society, while still providing them the opportunity to be part of Greek life and all of the wonders that go along with it,” Wright said. GRL wants members to maintain strong relationships with each other and embrace the diversity in the sorority even if they struggle with differences along the way. They also strive to create a family atmosphere for their members because often times the biological families of their members aren’t always the most supportive or loving regarding LGBTQIAA issues.

“It truly is a life-changing organization to be a part of, “ Wright said. “And honestly, we’re changing history.”