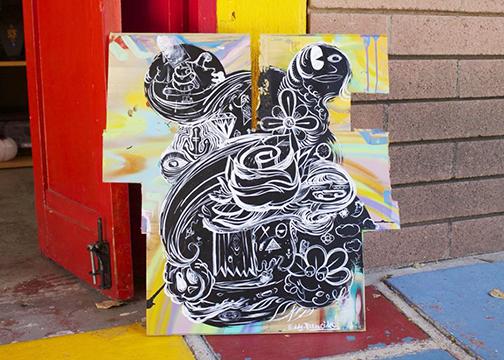 A handyman by day and psychedelic painter by night, San Diego surrealism artist Eddy Berducido is perhaps the reincarnation of the great Salvador Dali. He paints like him and looks like him, too, so he might as well be. His incredibly psychedelic and infinitely detailed work will be shown this Saturday, Sept. 27, at the $100 Dollar Art Show in Barrio Logan.

Berducido began his endeavors not as an artist, but as a skater. Skating since a young age, Berducido was surrounded by graffiti artists who spray-painted billboards and bridges. Enticed by the mere act of rebellion, he soon became a street artist, skating and painting at late hours of the night. His vandalism came with no consequences until 2009 when he was arrested and got stuck in a rut of community service.

When you think forced community service, neon vests and trash pick-up on the side of the freeway come to mind. Berducido instead joined a local art group, The Art Kids of San Diego. There he met Art Director Howard Woodward, who saw potential in Berducido and encouraged him to paint more art than just graffiti. It took a year of convincing, but from that point on Berducido “untaught himself how to do the art he knew” and began to develop his own cryptic, bold style.

Heavily inspired by ‘90s gangsta-rap and cartoons, Berducido’s art is peculiar to say the least. The artist paints things and people he has seen during the day. He also has an obsession with the arbitrary use of fish and beavers in his work.

This all might sound dreamy and a bit insane, but in truth, this sequence of events reflects who Berducido is as an artist. When looking at his intriguing artwork, there are hundreds of places to focus and overwhelming amounts of bright color combinations to comprehend. You don’t know what’s going on, but the moment you look closer, you realize it’s a wonderful mash-up of color. That’s the bizarre charm of a Berducido piece.

Berducido is far from an artistic cliché. He has a humble attitude and only creates his work sober; He mixes his paint with beer rather than water. He doesn’t believe in realism but creating your own version of the perfection you see. Most importantly, he has a raw and honest obsession to his art form. Go and check out two of his pieces at the $100 Dollar Art Show at La Bodega Art Gallery. You will honestly wonder why he’s not big in the art world.