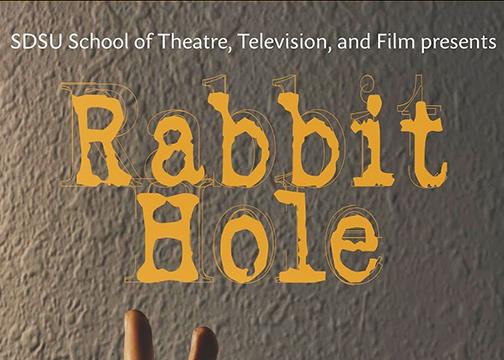 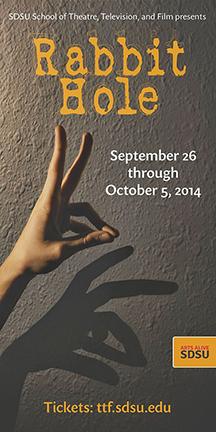 San Diego State’s School of Theatre, Television and Film presents a profoundly moving rendition of “Rabbit Hole,” a Pulitzer Prize-winning play examining one family’s battle with grief. The performances will leave the audience thinking about the play’s message long after the play ends.

“Rabbit Hole” focuses primarily on the grief of mother Becca (Katie Rich). Katie Rich never falters in carrying the load. The actress never makes a misstep during the play, often emoting anger, pain and even humor in the same expression. She transforms the final act’s pivotal scenes into an emotional tour de force that often leaves the audience moved by her pain.

Even as sharp as Rich’s acting is, Jack Holdeman almost steals the play from her. Holdeman plays a teenager distraught by the fact he drove the car killing Becca’s boy. He brings his character to life through a whirlwind of quirky dialogue and enough sudden movements to capably capture an adolescent not yet in control of his own body.

The rest of the cast includes Christopher Yarrow as the boy’s father, Courtney Stagner as Becca’s perpetually misunderstood sister, and Samantha Willard as Becca’s mother.

At first, Yarrow seems overmatched in playing the grieving father, but his initial awkwardness and rushed delivery is his character’s coping mechanism. The father isn’t able to grieve because he’s too busy trying to stay out of his wife’s doghouse. Near the end of the first act, Yarrow delivers one of the most emotionally compelling scenes. He accurately displays the emotional breakdown of a father forced to confront the people he holds responsible. When finished, those seated around me were asking if anyone had a spare tissue.

Stagner’s role is seemingly limited to comic relief and Willard’s to emotional support. It’s too bad the play didn’t deliver more stage time for them. Stagner displays a sound grasp of comic timing. Often, comedy is ruined by delivering the punchline too soon, but Stagner knows when to go for the throat and when to wait. Willard captures her character’s dual nature as supporter and griever. Her demeanor often carried more power than her words.

That a young cast masters the emotions and unspoken words of 30-year-old parents struggling with the death of their only son speaks to the skill of director Peter James Cirino. He places his actors precisely where they need to be and doesn’t ease the tension despite the play’s two-hour run time.

“Rabbit Hole” requires intimacy for it to work well. SDSU’s Experimental Theater’s small size, where the audience isn’t more than 25 feet from the stage, is perfectly suited for it. The lighting department also deserves kudos for capturing the tricky lighting required to make it as if the boy’s aura is ever present in the home.

“Rabbit Hole” is one of the first productions for the 2014-15 season. The resonance the actors brought to this complex, powerful play suggests this may be an exciting year for SDSU theatre.