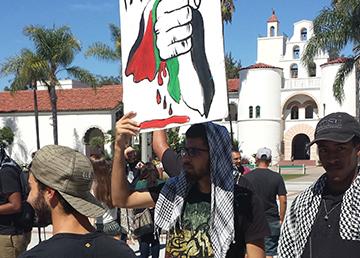 Students for Justice in Palestine held a die-in protest on Thursday, Oct. 2 on Campanile Walkway near the Hepner Hall flag poll.

SJP co-chair Osama Alkhawaja said the demonstration was held to bring awareness and as a memorial for victims of the violence in Gaza this summer.

Around 12:15 p.m., members and supporters of SJP formed a circle and each individual participating lay down and simulated being dead as Alkhawaja read names of victims aloud. Alkhawaja said he read 35 to 40 names.

Chair of MEChA Christian Benavides participated in the die-in. He said tabling to bring awareness is often ineffective.

“The reason for the die-in is to display not only what has happened — of all the people who have died — but it’s also to shock people,” Benavides said. “This is what you would have seen in Gaza.”

He said lying on the ground he imagined what the scene in Gaza was like during the summer.

“I was imagining what people were seeing, all the family members seeing family on the ground, imagining how shocking that would have been,” Benavides said.

Along the grass on Campanile Walkway, SJP placed 20 posters containing pictures and information of victims that have died in Gaza, as well as 120 smaller posters of victims’ names.

The images were of victims when they were alive.

Alkhawaja said the pictures tend to attract people. He said SJP is a “think global, act local” organization hoping to educate the campus of the issues surrounding Palestine and Israel.

“People want to know why there’s pictures of dead people all on campus, and they come ask us, so we let them know about the conflict—we educate them on what’s going on,” Alkhawaja said.

He said there’s two type of students: those that know little to nothing about Gaza and those that perceive Gaza through bias from media.

SJP also had a list of more than 2,000 deaths that occurred in Gaza this summer. The organization handed out pamphlets throughout the day to raise awareness for their cause.