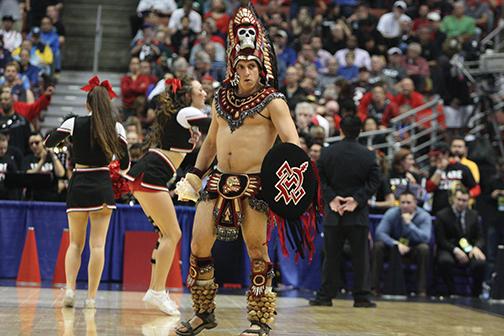 The Aztec Warrior mascot can be seen running the length of the field at football games, cheering on “The Show” at Viejas Arena and promoting the San Diego State spirit in the community. But what many current students may not know is that the warrior, whose history is relatively short lived, has been frequently contested by members of the Aztec community. As recent as last Thursday, new voices have emerged in the debate regarding SDSU’s official mascot.

The SDSU Queer People of Color Collective called into question the appropriateness of using an indigenous figure as a mascot on Oct. 2 when the group submitted Resolution to Change the Mascot to the Associated Students University Council, stating in an official resolution  “the continued use of the name ‘Aztec’ and the ‘Aztec Warrior’ mascot perpetuate harmful stereotypes of Native Americans.”

QPOCC members have rallied behind this issue and hope to inspire the campus body to partake in the movement.

“Our goal is to end the use of cultural appropriation and racist stereotypes perpetuated through our mascot and allowing the Associated Students and university to do their work to choose a new mascot if they decide that one is necessary,” QPOCC member and LGBT studies senior Thomas Negron said.

The resolution calls for the end of any official association with Aztec culture, including the spear in the SDSU athletics logo and the slogan “Fear the Spear.” If or when the university should choose to create a new mascot, the resolution states that the appropriateness of the mascot should be considered and that it should add to SDSU’s Mission and Goals to “promote human dignity” within its diverse community.

The QPOCC isn’t the first group at SDSU to raise questions related to the cultural sensitivity of various mascots, and movements such as these has spurred wide-scale campus debates in the past. The historical context of this conflict extends back nearly 100 years ago to SDSU’s first football game.

At the inception of the university’s athletics program, the media was lost on how to refer to the red and black team. Some pushed for the title of “staters” or “professors,” and in 1923 the student newspaper tried to encourage the “Wampus Cats” — none of which stuck among the campus community. It wasn’t until 1925 that SDSU President Hardy formally approved the “Aztec” nickname, as it was considered representative of a southwest culture and supported by the student body, according to GoAztecs.com.

For decades, Aztecs remained the title of SDSU sports teams, but there was still no official mascot. In 1941, Art Munzig was the first person to dress up and act as the ancient Aztec ruler Montezuma II during a halftime skit at the football season opener. The character gained popularity and students, faculty and community members began to commonly refer to the newfound mascot as “Monty” for short, according to Go Aztecs.com.

Monty spent the next six decades with relatively little controversy. It wasn’t until the year 2000 that the debate surrounding the misappropriation of cultural references to Aztec history thrust the campus community onto the national media scene. The topic proved to be divisive when the Native American Student Alliance submitted a petition to A.S. claiming Monty was disrespectful toward Native American culture, spurring former SDSU President Stephen Weber to convene a task force of students, alumni and faculty members to look into the matter. Weber personally created a 70-page report from his research and findings, according to an article from The Daily Aztec in 2000.

As the result, President Weber formally announced his decision to remove Monty as the mascot. He concluded that it was acceptable to have a human character represent the school, but the university must encourage a more historically accurate depiction of the ancient ruler.

These steps included removing the name “Monty,” insisting on referring to the charachter by his full name. Also, Montezuma was then to be referred to as the “ambassador” and was meant to behave more appropriately at sporting events, as opposed to the mascot who ran up and down the field with a flaming spear.

This still wasn’t the end of road for the Aztec Warrior. In the years following the transition from Monty the mascot to Montezuma the ambassador, some students and alumni felt they were deprived of having a true mascot. The absence of Monty gave way for the formation of The Aztec Warrior Foundation, a non-profit alumni association whose goal was the reinstatement of the Aztec Warrior mascot, and unofficially introduced the character to SDSU crowds at the Sept. 14, 2002 football home opener, according to the LA Times.

More than a year later, a campus referendum with unprecedented turnout showed the student body overwhelmingly voted in favor of adding the Aztec Warrior to the SDSU family, according to U-T San Diego. Three months later, the warrior made his official debut at a men’s basketball game against Colorado State University, sporting a new $11,000 costume.

Although this extensive past may seem convoluted to some, this is only a brief summary of the aspects that lead to our current university icon. Regarding the most recent addition to the Aztec mascot’s timeline, SDSU Chief Communications Officer Greg Block said the university has no plans to reconsider the use of the warrior.

“We are the Aztecs and we have every intention of remaining the Aztecs,” he said.

During the next few months, the SDSU community will likely have the opportunity to share their varied perspectives on the issue.  The Daily Aztec will provide more in-depth coverage of this debate and readers are encouraged to join the ongoing discussion by commenting on our website.

Update: Read the pro and con arguments by the Opinion section.