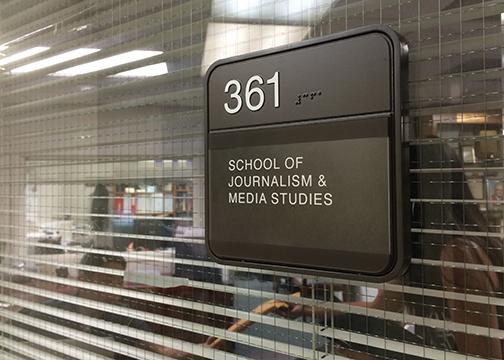 San Diego State’s School of Journalism and Media Studies will offer a new course that will allow students to enhance their Spanish writing skills and learn about Latino media coverage.

The upper-division course on Spanish-language and Latino media will include lectures and labs on the landscape of Spanish-language media, cultural sensitivity, such as when to use the word Hispanic versus Latino, and more. The course will be offered in the spring 2015 semester.

“We have important (media) professionals that serve our community … but if the professionals in these fields aren’t diverse, can they really serve the diverse society that is America today?” professor and Interim Director of the School of Journalism and Media Studies Bey-Ling Sha said.

Sha said research show media shapes people’s perspectives. She gave the example that if the media primarily focuses on Hispanics in the U.S. in the context of illegal immigration, people may think every Hispanic is in the country illegally. She added that the media needs to do a better job of covering the broad range of the diverse people that comprise the U.S.

“Only in this way can we have a more accurate picture of ourselves as a country,” Sha said.

This course will aim to enhance diversity in the media by training students who have some language competence to be fully bilingual.

She believes that in an applied field such as journalism it is important to look ahead.

“We have to prepare students today for what we think the field is going to look like five years from now, and that’s how you stay competitive as an academic program, and that’s what we’re doing at the School of Journalism and Media Studies,” she said.

The course is receiving national attention from media, which Sha said could benefit students because potential employers are “paying attention.”

She said the school wanted to do a Spanish-language and journalism effort but lacked resources in the past.

For this course, the school sent a proposal to the Public Relations Society of America Foundation and received a $25,000 grant. Some of the money was used to pilot a Spanish/English bilingual course in mass media writing in the spring 2014 semester.

“This is the second plank in a foundation of really building a Spanish-language media program,” Sha said. “Because that’s what we need. Our country needs it.”

Nancy Moeller is a journalism junior minoring in Spanish. She took the spring 2014 bilingual course and said at times the course was “intense” because it incorporated Spanish and English.

She remembers guest speakers such as members of the local Univision network speaking about the advantages of being bilingual and biliterate as a media professional in the U.S.

Moeller believes it is important that the School of Journalism and Media Studies offer courses to improve Latino coverage.

“There are some issues that someone without a Latino background would not get or would not understand than someone with one,” Moeller said.

Associate professor Amy Schmitz Weiss will teach the lecture component, and the school is looking for a lab instructor who has a native-level fluency in Spanish. Students are expected to be fluent Spanish speakers to enroll.

This article previously stated that School of Journalism and Media Studies received a grant from the Public Relations Society of American. The Daily Aztec apologizes for any confusion this may have caused.