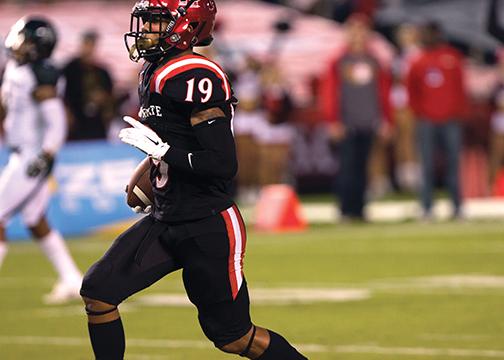 It’s unbelievable when the NCAA penalizes a student-athlete for celebrating. One such celebration occurred on Oct. 10 when superstar sophomore running back Donnel Pumphrey executed a — wait for it — gentlemanly bow after running for a 93-yard touchdown against the University of New Mexico.

While the Queen of England would’ve been pleased with Pumphrey’s pageantry, the NCAA was apoplectic and figuratively pointed its finger of shame at him, prompting its officials to tar and feather Pumphrey with accursed yellow flags.

But, I ask, why shouldn’t Pumphrey be allowed to show pride? After all, how many rushes of 93 yards can one see during any given college football weekend? The answer is as rare as a smiling British monarch. Scrolling through ESPN’s list of longest runs this year in Division I football, I note that Pumphrey places third in the nation. I’d tell Pumphrey to take a bow, but I wouldn’t want to risk provoking the NCAA’s culture cops to start snooping into whether or not I’ve used up my collegiate writing eligibility.

Why is it that a baseball player can pump his fists after belting a homerun? Why can a basketball player yell after a slam dunk? Or how about a soccer star sliding on the pitch after a goal? But let a football player take a bow? Balderdash! That’s 15 yards and a public shaming! Oh, the travesty and the hubris Pumphrey displayed that day. Tut-tut, I say, tut-tut!

This never used to be an issue. Back in the dark ages (the ‘90s), Heisman hopefuls such as the University of Michigan’s Desmond Howard could strike the iconic pose after scoring a touchdown while announcers applauded. But sometime around Joe Buck emoting anger over a full Randy Moon, the NCAA decided that it was tired of celebrating athletes. In 2011, they instituted the “excessive celebration” rule that it used to deflate Pumphrey. Now, we only hear about athletes when they appear in courtrooms. Coincidence? Perhaps.

Look, I’m not advocating a full-on celebration party in football. While I understand that sacks cause giddiness from 300-pound men, I don’t think offensive linemen should twerk every time they execute a perfect pancake block. And while wide receivers like to make the first down signal after hauling in a critical catch, it’s clearly inappropriate if a defensive back signals second, third or even fourth down after forcing an incompletion.

Not only is it unbelievable when the NCAA penalizes the fun, it’s un-American. I can act the fool after acing an exam — okay, probably not this year, but stay with me. I can, and should, boogie down whenever I find that the Aztec Student Union Starbucks has less than a 30-minute wait. And I can even high five every student I see after scoring a sweet parking spot in PS — oh, wait, I’m not about to disclose my secret spot to you. But why can’t Donnel Pumphrey?

It’s time to end this national embarrassment, this plight on the game we love.

So let’s support our Aztec athletes and demand the NCAA allows football fests of frivolity to return.