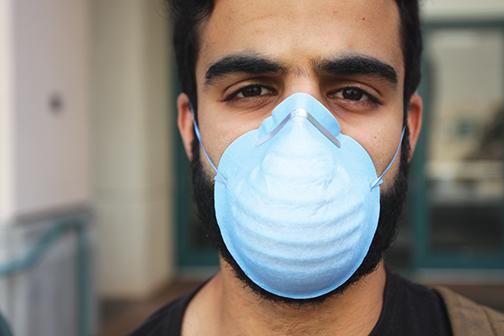 Students, faculty and staff received a late-night email from SDSU on Wednesday, Oct. 15, stating that an SDSU student was diagnosed with the bacterial infection. Sara Stelzer, later identified as a freshman and Kappa Delta member, died Saturday after being on life support.

Vanegas was among the hundreds of students who checked in, filled out a medical form, waited to be evaluated by a nurse and then took a 500 mg single oral dose of Ciprofloxacin.

Students also received informative documents and were required to wear a protective mask while inside the student health center.

Student Health Services received approximately 460 students on Thursday and 400 Friday, Lichtenstein said. A figure for Saturday was not available.

Of the hundreds of students that visited Student Health Services, preventive treatment was only offered to Kappa Delta sorority members and students who attended an Alpha Epsilon Pi party on Oct. 8 or a Delta Sigma Phi party on Oct. 9.  Those who specified close contact with Stelzer or another student experiencing symptoms of meningitis also received antibiotics.

Lichtenstein said secondary contacts did not receive antibiotics because they are at low risk.

“If someone is sitting in a classroom, even next to the person (diagnosed with meningitis), it’s extremely unlikely that (he or she) would contract it,” Lichtenstein said.

Lichtenstein advised students experiencing symptoms of meningitis — including a high fever, severe headache, nausea and vomiting — to seek attention at an emergency room.

A few students underwent secondary assessments and were sent to a local emergency room on Thursday and Friday, Lichtenstein said. As of Friday, he hadn’t received notification that those students were diagnosed with meningitis.

On Thursday and Friday, the wait time to receive antibiotics ranged from one to three hours. The student health facility extended its hours to 6 p.m. on both days, and opened Saturday from 9 a.m. until 1 p.m.

“The most difficult thing in terms of the process here is figuring out how we’re going to handle the load,” Lichtenstein said.

According to Centers for Disease Control and Prevention research, freshmen living in residence halls have an increased risk of attracting meningococcal meningitis than other college students.

Stelzer was vaccinated; however, it is unknown how long ago.

Lichtenstein said students vaccinated before the age of 15, which is common, are encouraged to receive a second vaccination prior to entering college. For students living in SDSU student housing, a vaccine is recommended but not a requirement.

“For a lot of vaccines, the immunization declines over a period of time, that’s why that booster is recommended before (students) go to college,” Lichtenstein said.

Because individuals can transmit the bacteria prior to feeling symptoms, students were encouraged to visit Student Health Services if they had close contact with Stelzer between Oct. 5 and Oct. 14. Stelzer began experiencing symptoms Oct. 12 and was hospitalized Oct. 14.

The time between exposure to the disease and the onset of symptoms can be between two to 10 days.

An average of 10 cases of meningococcal meningitis are reported annually in San Diego County, Lichtenstein said. This year, six cases have been reported.

SDSU has also offered counseling through Counseling and Psychological Services for students to cope during this time.