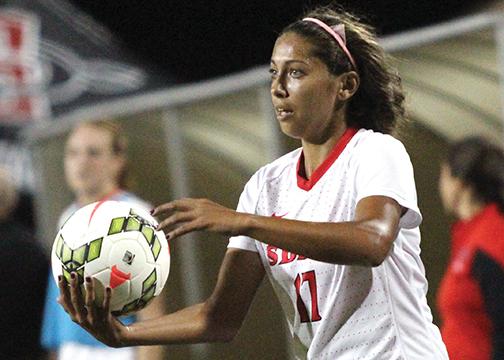 This game was a true tale of two halves, as SDSU (12-2-1, 7-0 Mountain West) completely shut down any game plan Utah State (8-5-2, 4-2-1 MW) entered the game with, including the Aztecs season trend of dominance in the second half. However, the Aggies did not back down to the conference leaders and put up a valiant effort in the second half.

“We are happy with the win,” head coach Mike Friesen said. “We are not happy about the last 20 minutes of the half in terms of giving up a goal and not focused on the things we needed to take care of. We are better than that. We want to be our best regardless of who we are playing, and towards the end of the game we were not able to do that.”

From the opening whistle, SDSU proved it was the superior team and outplayed USU in every facet of the game. The red and black quickly put pressure on the Aggies’ backline and their junior goalkeeper Jeannie Woller.  The Aztec were able to put a few shots up, but were not able to find the back of the net.

The Aztecs were finally able to twinkle the twine in the 20th minute as senior midfielder Katie Perry found freshman forward Aliyah Utush coming up the left side of the box. Utush was able to back down and slip past two defenders to bury her shot in the bottom left corner.

SDSU had a few more good looks at the net, but were unable to score to take a 2-0 lead.

In the opening minutes of the second half saw the Aztecs continued to push the ball forward and score their final goal of the game. Off a goal kick, senior midfielder Mariah Helmer headed the ball back toward the keeper that senior forward Hannah Keane gave chase to. Woller also came for the cover up, but Keane was able to tip the ball over the diving goalie and put her shot into the empty net.

In the 75th minute, freshman forward Wesley Hamblin sped her way down the right sideline and set up senior midfielder Lexie Morgan who took a shot from three yards out that hit the crossbar before it crossed the line.

USU finished the half controlling the ball and continuously putting pressure on junior goalkeeper Melanie Vaughn and the defense of the Aztecs. But SDSU was able to weather the storm and pull out the victory.

The Aztecs finished the match with an advantage in shots, 15-7, and corner kicks, 3-1. Both Utush and Keane recorded their fourth goals of the season as Perry notched her fourth assist on the year.

Be sure to read previous stories that recap the Aztecs’ win streak.