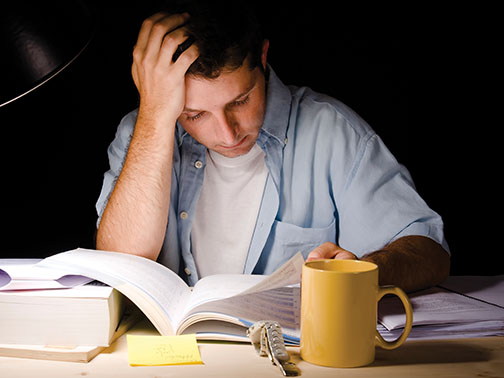 The leaves are changing and the air is getting chillier by the day — marginaly at least, considering we live in San Diego. Between Halloween, Oktoberfest and all the new video game releases, it’s safe to say October is one of my favorite months. But for students, October was a scary month, and not because of all the dismembered plastic hands on everyone’s lawn. The problem with this time of year is the nightmarish midterms scattered throughout the month.

Granted, midterms aren’t all bad. I’d much rather take a midterm and a final instead of a grueling cumulative exam at the end of the semester. But every class has a different schedule, so midterms are spread out through the span of a month.

The reason why midterms are so stressful to begin with isn’t the increased level of difficulty, but its dispersion around our already hectic daily lives. It would be better for students if midterms had a dedicated week, without the stress of classwork, like finals.

We’re all busy people, which is why juggling essays, projects and work, along with studying for a midterm or two, is no easy task, let alone when you have to continue this pattern for three weeks straight. Last semester, I had at least one midterm every week —  some unfortunate classes have two — five weeks in a row. By the third week, the sleep deprivation left me more worn out than a favorite pair of rainbows.

If midterms were more like finals, where class time devoted a week for the sole purpose of testing, then studying would be the scholastic objective. Sure, these exams would be as stressful as finals, but the trade-off would be getting midterms out of the way as quickly as possible.

It would be like removing a band-aid, fast and relatively less painful. It’s ridiculous to prolong the mental anguish for all of October.

The whole purpose of testing is to see how well students have learned the material. Therefore, wouldn’t it be ideal to eliminate any potential interference from the other classes? Ever have two major assignments due on the same day as a midterm? Judging from experience, it isn’t much fun (in my defense, I only procrastinated a little). But it’s insane to think students are being tested on equal grounds because everyone’s situation is different. If you have more going on in your life, you’re at a distinct disadvantage, even more so for the select few classes grading on a curve.

The only people this suggestion inconveniences are the professors who would have to reorganize their classes’ schedules. The only reason a student would be against this system is if they’re the type who enjoy slowly peeling off their bandages.

To be fair, not every class is the same either. The amount of content taught varies among classes. Not to mention some classes have three exams throughout the semester, while others have only two.

While it would be out of the question for every class to have the same format, it shouldn’t make much of a difference for classes to have a test in the middle of the semester, naturally what a midterm indicates.

After all, a majority of classes conform to the finals’ system because unless a meeting time falls on a holiday, every teacher has the same amount of time to educate students.

Whether a teacher wants to add or omit an extra test is entirely up to him or her. Either way, you won’t hear me complain — too much — because that decision will generally help students by giving an opportunity to perform better. San Diego State should dedicate a week to midterms because it would make our lives significantly easier without making the classes any simpler.