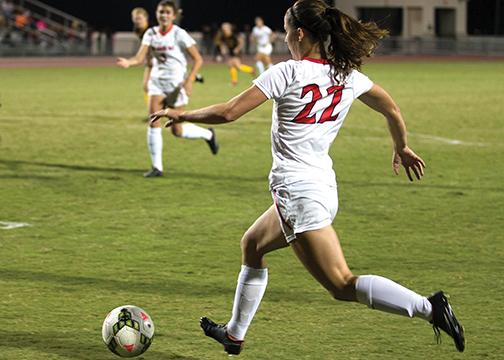 It all began last Friday as they played host to the Wyoming University Cowgirls in a crucial conference match as both teams were tied for the conference lead. After an even first half between these two squads, the Aztecs were able to capture the victory, 5-2, behind a valiant effort by freshman forward Angela Mitchell.

Freshman forward Aliyah Utush and her senior counterpart Hannah Keane were the first to begin the barrage of goals for SDSU in the 21st minute of the match. Utush outran her defender along the right sideline and sent a centering pass to Keane who blasted a shot to the lower left corner.

Wyoming responded 10 minutes later to notch the score at one apiece on a failed attempt by SDSU to clear a corner kick. Then in the 41st minute, Mitchell sent a pass from the end line that was directed for Utush, however, a Wyoming player attempted to clear the ball, but misjudged the angle and saw it go into the back of the net, giving the Aztecs a 2-1 lead going into the halftime.

In the 54th minute, senior forward Haley Locker took the ball from midfield and after beating two Cowgirls on the backline sent her shot from 10 yards out to put SDSU up 3-1.

Eight minutes later saw the tandem of Mitchell and senior midfielder Kelsey Booth tack on the fourth goal of the game for SDSU. The final goal for the Aztecs saw Mitchell taken down in the box — fourth time this season — and awarded a penalty-kick, where senior midfielder Katie Perry netted the shot.

Wyoming senior Alison Clarke scored the final goal in the 72nd minute on a free kick from 25 yards out.

The final road match for the Aztecs had them headed to Fort Collins, Colorado to face the Colorado State University Rams. The Aztecs were able to record another conference title with the win over the Rams, 1-0, but of course it was anything but easy as it took two overtime periods to decide the outcome.

Colorado State most likely watched game film on the Aztecs as they emulated the Boise State University strategy to knock the SDSU off its game by roughing them up. In the first half, the Rams recorded seven fouls and ended the match with 17. It worked, as the SDSU offense was unable to get any concentrated effort for 105 minutes of play.

The defense of SDSU however, was too much for the Rams offense and only gave up one shot on goal in 106 minutes of play.

The game-winning goal came off Utush’s foot as she was fed from midfield by junior defender Meggie Gulczynski. The forward’s initial shot was blocked by a Rams defender, but found its way right back to Utush who then sent the winning goal past Rams sophomore goalkeeper Jessie McGinley.