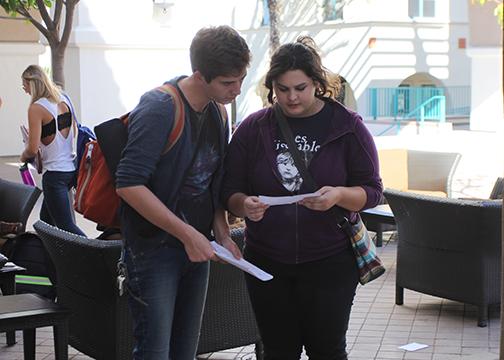 by David Hernandez and Jenna Mackey

San Diego State’s Students for Justice in Palestine dropped approximately 500 leaflets from the top of Hepner Hall as well as the second and third floors of the Conrad Prebys Aztec Student Union on Thursday, Nov. 6, as part of a simulated air strike.

The papers fluttering to the ground were meant to resemble leaflets dropped over Gaza ordering Palestinians to flee the region because of an imminent air strike.

“The Israeli Defense Force intends to attack terrorists and terror infrastructures in the area east of the Aztec Student Union and Hepner Hall,” the leaflets read.

A disclaimer at the top of the sheet advised that the attack was not real “but it would be if you lived in Gaza.”

“Israel is currently attacking and will continue to attack, every area from which rockets are being launched at its territory,” the leaflets read.

It ordered students to evacuate immediately toward College Avenue.

“Those who fail to comply with the instructions will endanger their lives and the lives of their families,” the leaflets read. “The attack will commence in 58 seconds. Beware.”

The only language changed in the leaflets were the locations of the attack to pertain to the context of SDSU, SJP Co-Chair Osama Alkhawaja said.

“The point that we are trying to make is that 58 seconds and leaflet drops aren’t a full proof method of ensuring civilians don’t get hurt, and that in that little period of time, you don’t really have time to get your loved ones and your possessions and evacuate properly,” he said.

This demonstration was seen by university officials as a violation of the student code of conduct. Several police officers and administration arrived before the leaflets were dropped.

“When you ask someone to evacuate when there is no intention of evacuation that’s disrupting university business,” Freddie Sanchez, assistant director of union events and communication, said. “Unfortunately, although there is a disclaimer at the top, it’s still a violation; hence why you see a couple of police officers.”

Student organizations must go through an approval process before putting on an event. Because the demonstration was a coordinated action between multiple SJP members within the campus environment, the university could consider it an event.

Sanchez said the university would look into SJP’s latest event to determine whether they must go through the judicial process that reviews student code of conduct violations.

“There is a judicial process where we hold our students accountable and they know that,” he said. “I think one of the biggest pieces is how do we support and educate them to ensure that if they are planning something similar again, it’s within code.”

Alkhawaja said he understands the university was concerned and he said SJP was also concerned for students’ safety, which is why he handed out fliers to students before dropping the leaflets. The informational sheets were meant not only to inform students the demonstration was not real, but to also to give them context and educate them, he said.

Alkhawaja added that the demonstration wasn’t targeting any specific students.

“I made the point clear (to administrators) that we had read the rules and we knew that we weren’t supposed to be scaring students, and that was never the intent,” he said.

“The point is to always change it up so students don’t become desensitized to the same method of educational events,”Alkhawaja said.

According to a report by Amnesty International, a non-governmental organization, Israeli forces’ actions could constitute war crimes because they directly “targeted civilians or civilian objects.” The report also found Palestine deliberately targeted civilians in Israel.