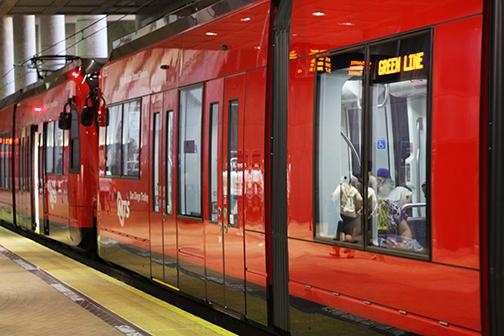 Due to a large anticipated attendance for the San Diego State Homecoming football game, the Metropolitan Transit System will increase the frequency of the Green Line Trolley this Saturday.

The SDSU Aztecs will take on the Idaho Vandals at Qualcomm Stadium on Saturday at 3:30 p.m.

To avoid trolley ticket lines, the MTS is encouraging trolley riders to arrive early and purchase a boarding pass on their smartphones.

Following the game, there will be the annual KGB Sky Show featuring a firework display set to music. With past crowds between 40,000 and 50,000, the Green Line trolleys will run at high frequency as needed after the show. Once the crowd diminishes, the Green Line trolleys from Qualcomm Stadium toward Santee will run every 15 minutes until 9:07 p.m. and then every 30 minutes until 10:37 p.m. Later trolleys will leave Qualcomm Stadium and end at SDSU. The last train will depart at 12:07 a.m.

For those heading to Downtown San Diego after the firework show, the Green Line trolleys will run every 15 minutes until 10:23 p.m. and then every 30 minutes thereafter. The last train departing from Qualcomm Stadium to go downtown will leave the stadium at 12:38 a.m.