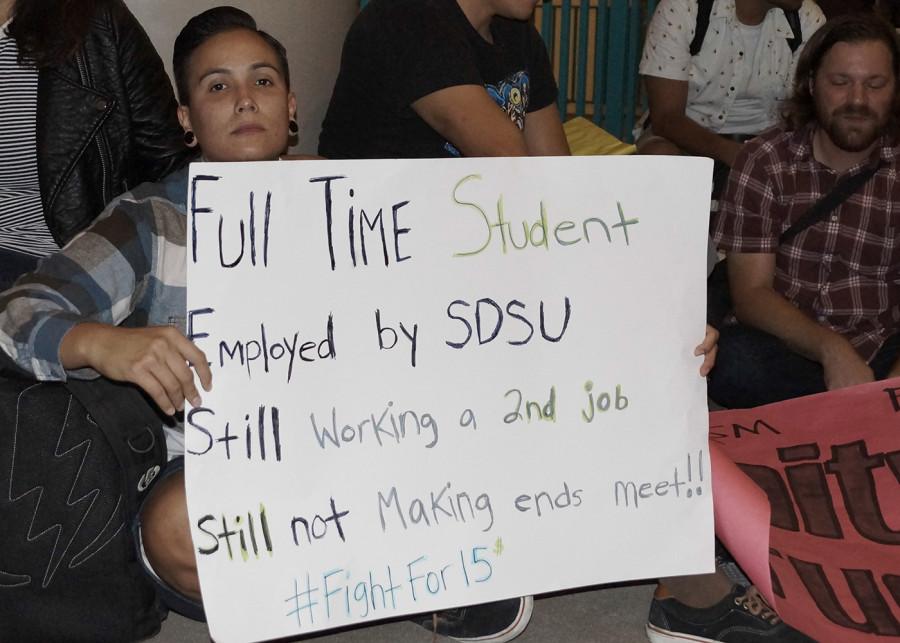 Tickets for the event ranged from $125 to $10,000, according to the Marshall Faulk website.

The proceeds of the event went to the charity run by former NFL running back and SDSU football star Marshall Faulk. The Marshall Faulk Foundation supports the Aztec Club, which provides football scholarships, and the Jackie Robinson Family YMCA youth sports programs.

The late Tony Gwynn, San Diego Padres baseball star and former Aztec, was acknowledged as an Aztec for Life Legend. His wife accepted the award on his behalf.

“It’s a way to build tradition and also fundraise to put money back into the community to help inner city youth,” Faulk said.

Despite philanthropic motives behind the event, protestors were outraged that SDSU was catering to San Diego’s wealthy community members.

The demonstrators arrived around 6:40 p.m. intending to meet with SDSU President Elliot Hirshman.  When event security told protestors he was not attending the fundraiser, the group continued to march throughout the Conrad Prebys Aztec Student Union.

The chants and rally cries from the group demanded the university give more support to financially troubled students.

Pastor Maria Santa Cruz from Our Savior’s Lutheran Church in North Park spoke on behalf of the student protestors.

“The students are tired of being homeless and hungry and starving,” Santa Cruz said. “So they don’t have any support here from the president or vice president.”

She said the majority of the students who were at the protest were homeless.

Gerontology senior Patricia Ruiz is a ministry assistant at the Agape house near SDSU.

“I’m concerned with the way certain students are struggling with rising tuition costs, fees, housing costs and food costs,” Ruiz said. “The university is not helping with resources to assist them.”

After about 45 minutes of chanting and marching the group left the union chanting: “We’ll be back! We’ll be back!”

The homecoming alumni event remained undisrupted despite the flurry of demonstrators.