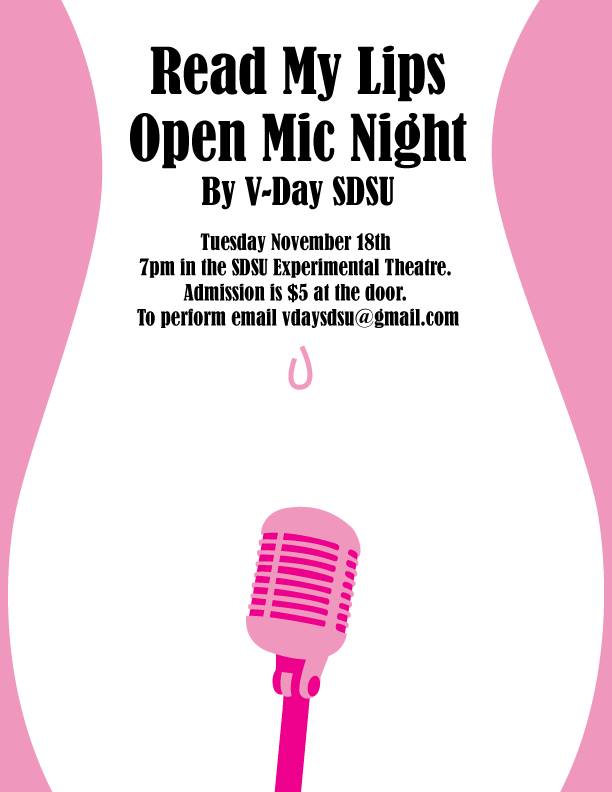 Founded by “The Vagina Monologues” playwright Eve Ensler, nonprofit organization V-Day is a global movement set on generating broader attention and funds to end violence against girls and women. At San Diego State, where crime alerts of violence against women occur far too frequently, V-Day SDSU promotes the message that harm against women — including rape, battery, incest, female genital mutilation and sex slavery — must be stopped.

One of the ways V-Day SDSU spreads the organization’s global cause is through its most impactful event of the year, “The Vagina Monologues,” which is a benefit performance of Ensler’s play featuring different monologues that empower women and promote individuality. Another is its bi-annual open mic night, “Read My Lips.” Like the benefit performance, 90 percent of the proceeds from the event will be donated to a local beneficiary that will be announced that night. The other 10 percent will go directly to the national organization.

“Read My Lips” is a great way for students to educate themselves on the V-Day movement as well as a preview for what to expect at V-Day’s “The Vagina Monologues,” which debuts Feb. 6. Tickets will be sold on Nov. 17 and Nov. 18 around campus where V-Day SDSU will be tabling, as well as at the door for $5. A reception will be held at 6:30 p.m. followed by performances from 7-9 p.m. on Tuesday, Nov. 18 at the SDSU Experimental Theatre. The reception will include tabling by other SDSU organizations and an appearance from Pinky the Vagina.

V-Day SDSU invites everyone in the community to an entertaining and enlightening night at “Read My Lips.” There is no cost for those participating in the event. The organization urges anyone interested in sharing songs, pieces of music, poems, skits or any other creative outlet of expression to participate in the open mic night. The club would also like to emphasize the importance of inclusivity in the event and straying away from the shaming of others. The club meets at 7 p.m. every Thursday and anyone can drop by. V-Day SDSU is always welcoming new members who support its mission, female or male.

If you would like to get more information on where the organization meets or if you’re interested in participating in “Read My Lips,” email vdaysdsu@gmail.com. Also remember to look out for V-Day SDSU’s performance of “The Vagina Monologues” in February.