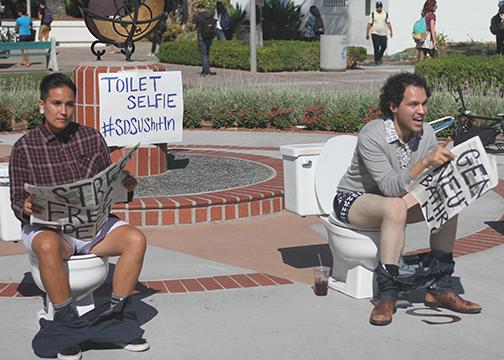 When I was approximately 7 years old, I remember desperately needing to use the restroom, but the men’s restroom was out of order. I swallowed my young pride and walked into the unexplored land that was the women’s restroom. It was one of the more uncomfortable moments of my life. Even after I relieved myself, there was still an uneasy feeling in the pit of my stomach resulting from me being somewhere I didn’t belong. Thankfully, I only had to experience this once. Without gender neutral restrooms, this is a daily occurrence for transgender students.

To raise awareness about this concern and demand action, the Trans* Action and Advocacy Student Coalition Force put pressure on San Diego State’s administration and hosted a S–t In. If SDSU had made an effort to listen to the concerns sent its way, this school would be more inclusive of its students’ problems. Although gender neutral restrooms would improve the well-being of many students, some people are unnecessarily hesitant in embracing this idea.

There is more to bathrooms than walking through a stall and pulling your pants down. Unfortunately, many students and administrators are having a difficult time understanding this issue.

“Walking into a restroom is making a statement about your gender,” astronomy graduate student and TAASC Force member Eliot Vrijmoet said. “It can be difficult to go into a restroom because you’re thinking ‘Well, am I trying to say what I identify as? Am I trying to say what I’m (presented) as? I just really have pee. I’m really stressed out.’ It puts you in a vulnerable position.”

This shouldn’t come as a surprise, but not everyone is open to sharing a bathroom with a trans individual, resulting in harassment. Gender neutral restrooms protect SDSU students and simplify a decision most of us haven’t had to make.

The main issue is the small number of gender neutral restrooms. SDSU currently has 15 and while the effort is acknowledged, it’s not enough. I can’t imagine walking halfway across campus to pee being convenient in any way whatsoever. There should be at least one in every single building — as we expect with any bathroom.

SDSU bathrooms are pretty awful to begin with, but there’s absolutely no need to fret about sharing a restroom with someone of the opposite sex. California Building Code has specific requirements for having both men and women restrooms. You can still have your gender specific restrooms if that’s your thing. Gender neutral restrooms don’t take anything away, instead they add options.

“There aren’t a lot of things you’d have to change if you wanted to make a multi-stall gender neutral bathroom,” Vrijmoet said. “A neutral bathroom is not necessarily a single person bathroom. Those are great, but it’s obviously expensive to put a lot of those in.”

As of now, all the gender neutral restrooms are for single use only. The quickest and easiest way to make them inclusive by saving the school some money would be through modification some of the pre-existing multi-stall bathrooms. While some may object to this, bathrooms are based on mutual trust in the first place. No magical barriers prevent someone with testicles from entering a women’s restroom. As long as this trust and respect is maintained for a multi-stall gender neutral restroom, there shouldn’t be any more problems than usual.

Those who considered the protest to be in bad taste couldn’t be more wrong. It received national recognition — mostly because people love puns and vulgar language. The TAASC Force did its job in getting people’s attention in a clever way. People now know this is an issue at many college campuses, which is the first step in getting it fixed.