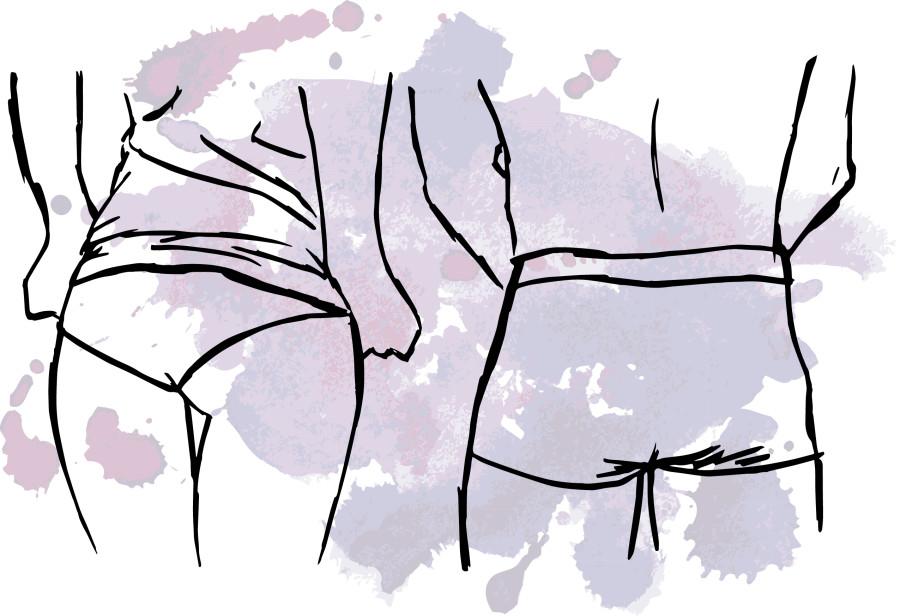 During my time at San Diego State, I’ve seen more butts than I expected to see in a lifetime. This is new for me as a transfer student from upstate New York, but I’m intrigued by the prevalence of butts, not only on campus, but across the United States. I recently became aware of Instagram sensation Jen Selter, who’s made a career off the attractiveness of her butt — talk about squats paying off.

Other celebrities, such as Kim Kardashian and Nicki Minaj, are fawned over for their voluptuous posterior endowment. When did that absurdly exaggerated ideal of a slim woman lose its momentum to the ample butt? Why has this muscle so suddenly and so forcefully captured the attention of men and the aspirations of some women? It’s hard to say when the butt really started to upset the hierarchy of erogenous body parts — long reigned over by breasts — but there is sufficient evidence on the SDSU campus alone that the butt is the new erogenous zone in the U.S. This domination has in turn blurred the lines of traditional gender roles between men and women as it relates to dating. With the dominance of one body part, female sexuality has taken an interesting turn and displayed a part of the ongoing trend toward woman freeing themselves from a passive role in sexuality.

The emergence of the butt can largely be accounted as a product of female empowerment. In contrast with breasts, which are genetically predetermined and alterable only through visits to a plastic surgeon, the appearance of the butt is determinant on physical fitness. The butt now serves a very functional physiological purpose as an important source of physical strength. It can be made stronger, and therefore larger, through exercise. As a result, nice buttocks become a marker of a woman’s discipline and sometimes her desire to emphasize that part of her body. For women who work on the physicality of their butts for the purpose of attracting sexual partners, it’s a statement boldly asserting a woman’s ability to thrive as an independent aggressor who actively seeks romantic partners as she pleases.

Although female empowerment is certainly not new to Western culture, its manifestation in sexual assertiveness is still relatively new. Gone are the days when a woman had to wait for a man who happened to sweep her off her feet. Today’s college-aged women have the power to reject the idea of being a passive object of desire. Modern women pursue their passions in an intelligent, calculated and vigorous way. The butt, and all its connotations of physical perfection through hard work, is the current perfect example of this.

“Reeling in guys with their physical appearance, such as a big butt, gives some women a sense of control, and then going into the situation knowing that it’s ‘no strings attached’ also feels liberating for some women,” English junior Kara Ferguson said. “They have less expectations, aside from feeling beautiful or attractive.”

Miranda Collinge, a writer for Esquire, said our inclination toward the tuchus may have its origins in our Paleolithic ancestors. She cites the 1967 book “The Naked Ape” by zoologist Desmond Morris who claims our early human ancestors “must have been using the rear approach.” In other words, sex from behind was the preferred method. Somewhere along our evolutionary path, humans discovered love and have since sought to make sex more personal, hence the out-of-date attraction to the front of the body.

If this is accurate, then the renewed interest of the backside is one to think about. Some may use this logic to argue that young women, in beautifying their butt, are sacrificing love for fleeting pleasure.

This may be true for some women, as is always the case with trends, but it’s more than likely that the true nature of this fad is a sense of empowerment. Women can work on their bodies for physical fitness, or to take the opportunity to own their own physical attractiveness and entice those who they wish to sleep with. Either way,  the bottom line is that this control over their bodies is symbolic over the control of their lives.

Women are beefing up their bottoms for reasons similar to why men beef up their upper body. The phenomenon many have seen on campus — the exposure of butts through high-waisted shorts — is similar to a man showing off his well-trained biceps. These individuals are comfortable showing off their bodies on their own terms. This sexual symbolism directly reflects the sexual freedom women are embracing in societal shift. We are all in charge of our own bodies, and a woman’s right to emphasize her backside is simply one aspect of her overall ability to choose how she wants to present herself and what effect she wants to achieve with said presentation.

Whether this butt trend is part of a revolution or a response is, in the end, for women to decide. It’s part of a cultural shift that’s changing the way the West thinks about gender roles. It’s not just about the embracement of a body part, nor is it another form of oppression — the butt symbolizes the sexual empowerment of women in Western cultures.