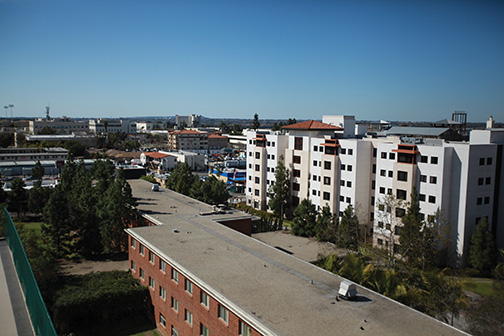 In response to complaints about high-occupancy houses surrounding San Diego State, the city is revising its rooming-house ordinances to limit the number of leases granted in a single home and clarify what homes could qualify as rooming houses.

These “mini-dorms,” or High Turnover, High Occupancy houses are an issue for some College Area residents who say the homes were designed for two adults and their children, rather than six or more adults with cars. Parking space is a major issue for neighbors, as is noise level, trash, and wear and tear on the homes.

College Area Community Council members went to the Public Safety and Livable Neighborhoods Committee meeting on Nov. 13 to voice some of their concerns before members of the San Diego City Council.

In a unanimous vote by the Public Safety and Livable Neighborhoods Committee, two aspects of the City Municipal Code defining a “Rooming House” were clarified to eliminate loopholes and more clearly define how many people may have separate leases in a single home.

Rhea Kuhlman, president of the College Area Community Council, has lived in the area for 27 years. She said the complaints the council presented aren’t aimed at students necessarily, but rather at profit-driven landlords who are taking advantage of students and disrupting the neighborhood by offering many individual leases, which can lead to overcrowded homes.

The original rooming-house ordinance stated there could not be more than three leases per house. However, the city says this rule has been difficult to enforce in the past.

One section of the ordinance was deleted completely, as it was inconsistent with another section that defined a rooming house. The new changes to the ordinance state that kitchens and bathrooms don’t count as rooms for dwelling and clarify that oral leases count the same as written ones.

“We do not object to student rentals,” Kuhlman said. “But imagine you had lived here for many years, you got married here, raised your children here, and all of a sudden someone puts a hotel right next to your home. How would you feel?”

Ann Cottrell, chair of the Code Enforcement and Nuisance Rental Property Committee for the council, agreed that the students aren’t the crux of the issue, and explained that some of the living conditions aren’t merely inconvenient, but dangerous.

“We know of people living in garages that haven’t been converted, which can be unsafe, and some homes aren’t up to code,” she said. “Students have a right to a house that is safe and well-maintained.”

Cottrell has lived in the College Area neighborhood for 46 years and estimates there are nearly 700 single-family homes in the area being used as student rentals.

Some managers and landlords choose to avoid such issues by renting houses out to groups, as opposed to renting rooms individually.

“My company chooses to rent out the homes we manage as one house, we do not rent by room as to avoid the mini dorms. Yes, I could get more money if I rented out each room, but the amount of damage does not outweigh the financial gain,” Melissa De Marco, who his in charge of Operations and Marketing at FBS Property Management, said.

SDSU’s Associated Students Good Neighbor Program has distributed a brochure in the past that helped students become aware of the relationship between area residents and students.

“This really is a terrific resource for renters and owners alike,” Cottrell said. “We are very grateful for A.S. for creating this … and for years they distributed it around the College Area, but alas, the information does not get passed on and owners, managers who should make it available to tenants apparently do not.”