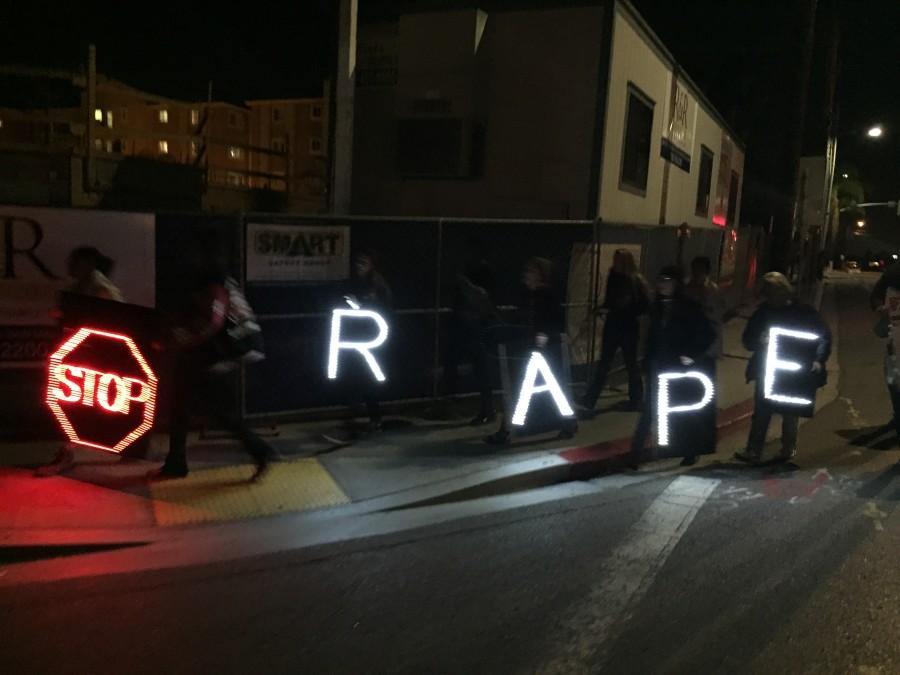 Approximately 35 individuals marched throughout the SDSU area on Nov. 21 as part of a Take Back the Night demonstration.

“Fraternity brothers have had a horrible track record when it comes to not raping people,” Busse said. “(Friday) night’s sexual assault reinforces this fact.”

Busse said passing cars also egged the marchers. It is unclear if the individuals in the car were SDSU students.

The InterFraternity council has suspended social events in order to focus on educating its members about sexual assault, Associated Students President and Sigma Phi Epsilon member Jonathan Cole said. The Panhellenic Council, National Pan-Hellenic Council and the United Sorority and Fraternity Council will educate its respective members on the impact of sexual assault.

The Greek community is planning to start sexual assault training for every Greek student immediately and some fraternities have already started preparing educational presentations on sexual assault, Cole added. Fraternity and sorority members will be required to partake.

Cole said the InterFraternity council will decide when to end the suspension of social activities, but it will last at least through the remainder of the semester.

Meanwhile, the university is investigating the allegations.

Cole said members will be held accountable and should be expelled from their respective fraternities if the allegations are true.

“In our Greek community we have no tolerance for those actions,” he said.

SDSU President Elliot Hirshman addressed the issue and the fraternities’ decision to suspend social events in a statement last Wednesday.

“I commend the leaders of the Greek community for recognizing our shared responsibility to end sexual violence and taking these proactive steps to address this critical issue,” Hirshman said. “We must work as one community to create the substantive changes necessary to end sexual violence on our campus. The steps outlined today are the beginning of what must be a sustained effort to change attitudes, culture and actions and the university is committed to working with, and supporting, our Greek community as it pursues these essential efforts.”

Sigma Phi Epsilon President Austin Dean said the fraternity will be conducting an internal investigation as well. He said members would be expelled from the chapter if the allegations are found to be true.

Cole said several Sigma Phi Epsilon members are involved in the FratMANners program, which teaches about sexual assault intervention and awareness, and those members will give a presentation to the fraternity.

He praised actions SDSU has taken to combat sexual assault, but said there is more work to be done.

“I don’t think we should be satisfied with where we’re at,” Cole said. “We can do more and we’re going to do more.”

Members of Concerned Students of SDSU, who organized the rally against sexual assault alongside Take Back the Night, previously demanded that SDSU suspend all fraternities, referencing University of Virginia’s decision to suspend Greek life activities after a report of an alleged gang rape at a fraternity party.

The group is also urging SDSU’s Sexual Violence Task Force to include a broader variety of students, such as LGBTQ, minority and activist students.

In addition, Concerned Students of SDSU is asking for the university to support a Take Back the Night Week and a Reporting App created by women’s studies students, Aztecs for Awareness and the  Andrea O’Donnell Women’s Outreach Association.

SDSU communications student Frida Ortega participated in the Take Back the Night rally and said the fraternity members actions did not deter her or the other demonstrators.

“It actually encouraged us and motivated us to continue, and even chant louder because obviously they were upset that we were bringing this issue to light and they felt uncomfortable,” she said.

Ortega said she believes there is more the university can do to combat sexual violence on campus, but she’s pleased Greek organizations will be taking steps to educate its members.

“I think it’s amazing on the part of the fraternities because they are acknowledging that this is a problem and that their institution or fraternities are in a way promoting this,” Ortega said. “Men should be at the forefront of this because sexual violence makes men look bad.”

Meanwhile, Busse said SDSU has has not shown survivors they care about combating sexual assault.

“They can list all of the things that they have done, but it is not enough,” she said.