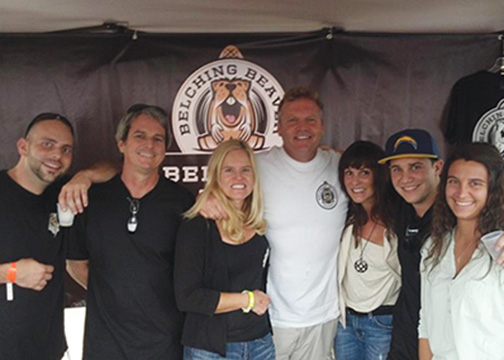 With San Diego State’s successful craft beer certification program and the growing popularity of its culture in San Diego, successful breweries and brewers are not uncommon.

The Daily Aztec: Did you always know you wanted to get in the brewery business?

Tom Vogel: No, and yes. The first resume I ever sent out was to Coors, straight out of SDSU. I did not even get a response from them. I started a mortgage company to make money and ran that for over 20 years. That got real boring.

DA: What inspired you to join the brewery industry?

TV: I had been a home wine maker and a home brewer. One late night I was brewing and accidently dropped a full 6 gallon glass carboy on the floor. In frustration, I turned to my wife and said “I am going to open a place, hire a good brewer, so I don’t have to do this crap anymore.” I publicly said I was going start my own place drinking a beer at Lost Abby, one of my favorite breweries. Once you tell your friends you are going to do something, you have to do it, which is pretty much why I said it. I was set when I knew I had Troy Smith, a poker friend and commercial brewer, jumping on board with fellow wine maker, Dave Mobley. We had our team and that was it.

DA: How has your journey been so far?

TV: Honestly, it’s been amazing. We now have two locations and just purchased our 3rd, which will be a 6,600 sq. ft. brew pub in downtown Vista. We hope to open that one by summer 2015. The growth has been fantastic. And your customers — wow. What a fun bunch of people you get to meet and get to know. You don’t really think about that when you decide to start a brewery, but it’s the best part.

DA: What are some obstacles you’ve faced along the way?

TV: Capital is always difficult in the beginning. Our business plan (at this level) does not allow us to take on investors or take on loans. We want to stay organic, let the business grow on its own merits. With that comes lack of brewing tank capacity — we always run out of beer. It sounds like a good problem to have until you realize your accounts don’t feel that way.

DA: How do you stand out in San Diego’s vast brewery industry?

TV: Our brewermaster, Troy Smith, came out with a Milk Stout. We were the first to make one in San Diego. It went really well. Now you find other breweries coming out with one. We have a Peanut Butter Milk Stout — we were the first in San Diego to mass-produce one all year long. So, unique beer and beer everyone likes.

For those interested in pursing a career with the brewery industry, Vogel provides four ingredients crucial for success: Capital, business experience, good brewer and great partners.