Saint Archers brews for the love of the sport 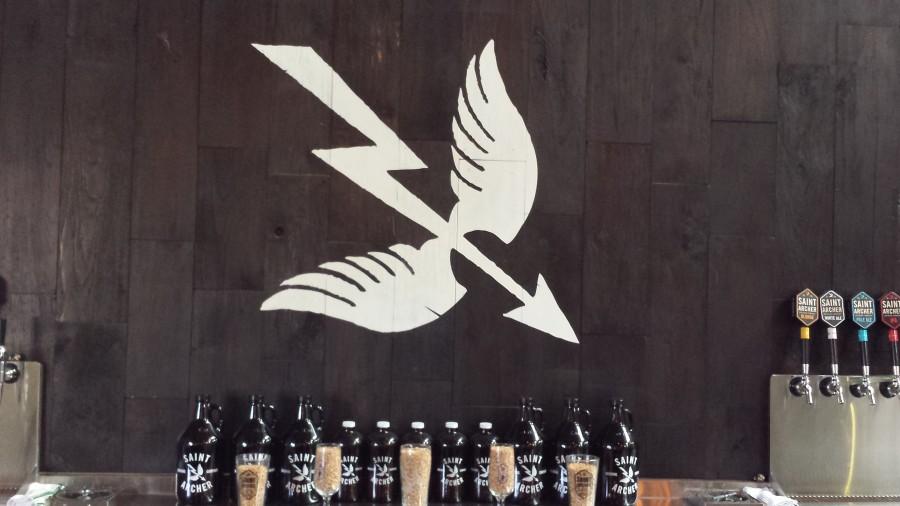 Craft breweries have generally been distinguished by their quality alone, but Saint Archer Brewing Co. has revolutionized this tried and true concept. The brewery still strives to make the best brews possible, but it has added something extra: It’s given beer an extreme sports image.

Josh Landon, one of the first co-founders and current CEO of Saint Archer in San Diego, came up with the idea.

It all started when Landon was with professional surfer Taylor Knox at a surf contest in Puerto Rico. A hard liquor company asked Knox to sponsor its drink. To Landan, it didn’t seem like a natural fit because they both enjoyed craft beer more.

That’s when he says the light bulb went off. There wasn’t a craft beer in the industry that felt personal. It lacked a certain identity that mainstream beers, such as Coors and Budweiser, promoted. Other products have had successful start-up stories, so Landan applied the same logic toward his brewery idea.

“If we could get all our friends from the entire industry, the best of the best, we could make something special,” Landan said. “This would be the best story ever. We all drink craft beer after all.”

From that point, Landan, Mikey Taylor and Paul “P-Rod” Rodriguez, both professional skateboarders, started Saint Archer, with Knox coming on board shortly after. More big names in action sports, music, film and brewing industries join Saint Archer as investors who give back to the company as much as it receives.

“It’s a young, creative mindset building a business, so it’s not locked into any format as far as investments go,” Saint Archer bartender and applied design senior Scott Davis said.

Once enough people joined Saint Archer, its brand took off on Instagram. It currently has more than 40,000 followers and there’s no doubt the brewery utilizes social media to its full potential. Landan said the company has received overwhelming support and he’s even  seen fans wearing the Saint Archer logo in Japan and Russia.

According to Davis, who’s also family friends with Taylor, out of the approximate 20 owners at Saint Archer, not a single one owns more than 17 percent of the company.

“They’re naturally driven people looking for their next thing,” Davis said. “It’s hard to make extreme sports your lifelong career even though they probably could. It’s more of a passion thing.”

The brewery is in Miramar, but Saint Archer also has a tasting room in the brewing warehouse. It’s open every day and craft beer enthusiasts are welcome to sample upcoming brews.

The beer is inexpensive and according to Davis, the tasting room doesn’t make much profit, instead it exemplifies the image the brewery is going for.

To add to its culture, a bunch of Saint Archer merchandise is also available at the brewery, which sells more than one might expect.

“Skaters and surfers are reppin’ it, so it starts to advertise itself and gets the image out there,” Davis said.

Despite their recent success, Landan hopes to keep a good balance between affordability and taste, while keeping the focus of simply drinking beers with friends alive. Those at Saint Archer aren’t in it for the money like most sponsors. They want to make beers they enjoy drinking.