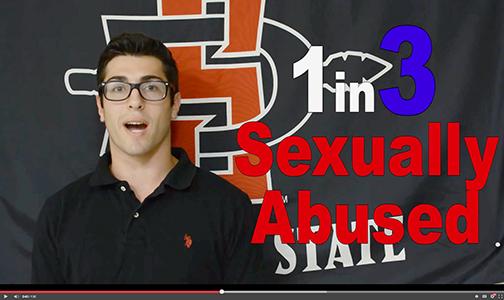 The video, titled “It’s On Us,” received more than 2,000 views in two days. Viewers are encouraged to take the “It’s On Us” pledge along with the fraternity.

“Take a pledge and take a stand with us to keep both men and women safe from sexual assault,” a member says in the video.

Phi Kappa Theta President Ahmad Sanatyar said raising awareness for the issue has become a personal mission for the men of the chapter and that the video and social media campaign are just the start. Sanatyar said that the chapter has other related projects in development.

“To the extent such allegations are true, this conduct is unacceptable and does not reflect the values of the Greek system at SDSU,” Cole said in his email.

Members will be required to undergo sexual assault and bystander training, according to the email.

Following the Take Back the Night allegations, SDSU has drawn national attention, including coverage from Greek organizations. Total Frat Move, a website with more than 966,000 followers on Twitter, published an article that describes the allegations as an “embarrassing display of stupidity.”

“While you may not have any connection to the campus’ sexual assault issue, making yourself look like an a– during a rally to end a horrible problem is the antithesis of everything you’ve ever been taught about public relations,” senior freelance writer Move Bogey Wells wrote.

The university is conducting an investigation into the allegations. Director of Student Life and Leadership Randy Timm said he is speaking with members of Sigma Phi Epsilon and Delta Sigma Phi fraternity, as well as the demonstrators.

Concerned Students of SDSU, a group that co-organized the Take Back the Night rally, released a letter on Nov. 24, describing the allegations. The letter repeats the phrase ‘This is rape culture’ three times and demands bold action from the university to combat rape culture.

President Hirshman also commented on the matter in an email following the allegations.

“I commend the leaders of the Greek community for recognizing our shared responsibility to end sexual violence and taking these proactive steps to address this critical issue,” Hirshman said in an email.

Watch the video below: