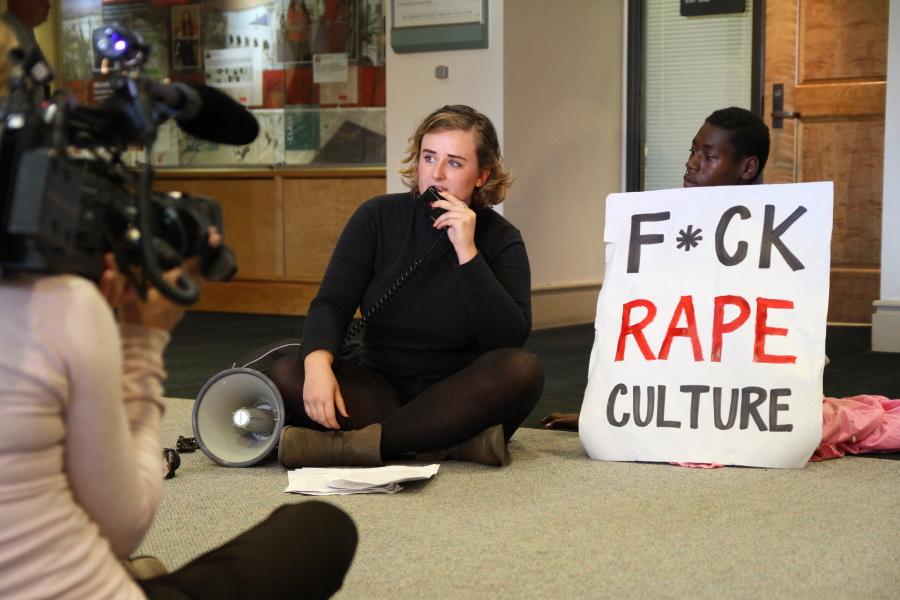 The group of San Diego State students that claimed fraternity members harassed them last month during an anti-rape rally presented its demands to the university today.

The students, mostly Concerned Students of SDSU members, marched from Hepner Hall to Manchester Hall, where they spoke with SDSU Title IX Coordinator Jessica Rentto after group member Jordan Busse read their demands, which are the following:

SDSU President Elliot Hirshman must hold an open forum to discuss sexism and sexual violence at the beginning of the spring 2015 semester.
Associated Students President Jonathan Cole and members of Delta Sigma Phi and Sigma Phi Epsilon must step down from A.S. positions. Marc Hess must step down as InterFraternity Council president. All members should participate in education about sexism and sexual violence.
SDSU Police Department must stop victim-blaming messages and racial profiling.
SDSU must take into account Dr. Huma Ghosh’s recommendations for the women’s resource center and provide ongoing support, including funding and staffing to programs already underway, such as Aztecs For Awareness, Sexual Violence Task Force and the Andrea O’Donnell Womyn’s Outreach Association.
SDSU must institute a gender/sexuality studies class as part of the General Education requirements.

Students also discussed the Take Back the Night allegations with Rentto. Busse said “what hurt most” was that they have not received an apology.

Rentto discussed the newly added student subcommittee of the Sexual Violence Task Force and the “campus climate” survey about sexual assault that the university is developing for next semester.

She said it is important for those concerned to refrain from singling out the fraternities for perpetuating sexual assault because it is an issue that requires their cooperation along with campus wide awareness.

However, students said it is important to focus on fraternities because they are a small community as opposed the entire campus.

Some students also argued that Cole represents fraternities on campus as the A.S. president instead of the entire student body.

Rentto said Cole is interested in speaking with Concerned Students of SDSU members to hear their concerns.

“I think the base takeaway is that there’s a lot of students who want to be heard, and providing them with a mechanism so that their concerns and their ideas are heard is really important, and my hope is that with our Sexual Violence Task Force and our student subcommittee, that that will be a great outlet for our students to have a voice,” Rentto said.

She said was glad she had the opportunity to speak to the students because it is important to let students know that the university and students aren’t on opposite sides.

Hirshman was not available to meet with students because he was at the chancellor’s office in a meeting that was booked at least a month in advance, Rentto said.