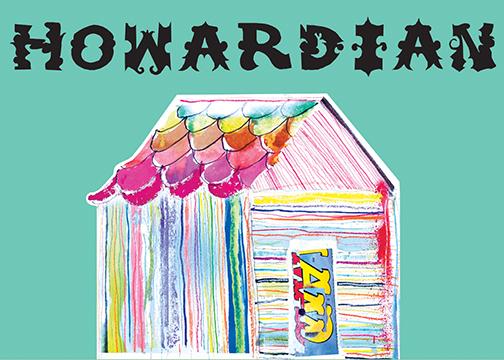 Ian Vanek is the drummer and vocalist of art-rock group Japanther, and the artist now focuses his time on Howardian, a solo side project of pure Pacific Northwest rock and roll. He recently put out Howardian’s debut album “Land of the Low Tides” on Jan. 13, released from Bufu Records and Japanther’s own label Tut Tut Now Shake Ya Butt.

First of all, what is a Howardian? It’s a combination of one of Vanek’s childhood names “Howie” and his first name “Ian.” Howardian is also not a new project whatsoever. It began in 1995 and is now solidifying its place in the garage-rock scene 20 years later.

Howardian started largely as a personal project for Vanek, where he created small EPs for friends and family. However, surrounded by the exciting Washington music scene, Vanek was inspired to get on the level of these rising bands and started his current album, beginning the new direction of Howardian.

Though it plays as an important inspiration, Washington’s music scene isn’t the only prominent influence in the band’s new album. Vanek notes the nature in Washington as a large inspiration. Songs such as “Be Fruitful” and “New Leans on Old Loans” pay homage to the murky and grey of the Northwest with its heavy layers of guitar and bass.

Vanek categorizes Howardian’s music as a mix of art rock, Northwest garage rock, and adult-contemporary punk-rock hip-hop. The latter might confuse some as punk and hip-hop are rarely merged, but the combination has a heavy presence in Howardian’s latest.

Rigging hip-hop with rock and roll is what distinguishes “Land of the Low Tides.” At surface level both genres seem so opposing, but rock and roll and hip hop embody the same spirit of defiance. That spirit is translated in Howardian’s openers track “Chunking” that begins with the statement “they’ve won the battle but they haven’t won the war.” Another song, “Can’t It Wait”, also brings in a Run-D.M.C-type sound before explosive guitars come in and change the sound.

“Land of the Low Tides” is out now, but what’s next for this solo project? Howardian plans to embark on a 49-state tour in the coming year and is currently working on a split EP with Hundreds of Thousands. Until then, the deep-rooted Northwest grime and heavy commitment to hip-hop beats of Howardian’s new album make for a must-listen for any music fan.