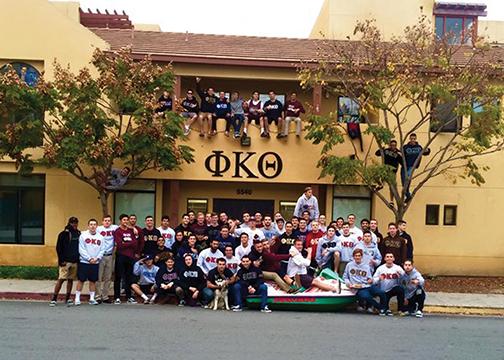 San Diego State’s Phi Kappa Theta fraternity broke the university’s record for the most community service hours completed by an organization in a single semester. Once the University verifies all hours, the fraternity will have earned a total of 3,025 hours last semester.

Phi Kappa Theta was involved in a variety of community service events, such as feeding the homeless on Wednesdays and Thursdays, completing a breast cancer awareness walk, volunteering at the Boys and Girls Club, hosting a dodge ball tournament to raise money for charity, and participating in beach cleanups.

He said one of his favorite memories came from volunteering at the homeless shelter one night when a group of his fraternity brothers decided to walk around the block and bring extra food to those who could not make it to the homeless shelter. There they met a man named Tony who began to tear up as he told the young men about his life.

“He had a really interesting life story and it moved us all,” Shapiro said. “I remember one fraternity brother in the circle actually started crying. We asked if there was any way we could help him and all he wanted was a sleeping bag, so we brought him one the next time that we saw him.”

He said he looked forward to events such as feeding the homeless and working with the Boys and Girls Club because he was able to interact directly with the people he was helping. He said those experiences were humbling because it made him realize that his problems were not as serious as those other people are experiencing.

Shapiro said his passion for giving back to the community sparked at a young age when his father would bring him along to various events such as the Special Olympics when he was three years old.

In high school, Shapiro volunteered at a Relay for Life event in which he met a boy, Kevin, who was battling cancer at the time. A few years later Kevin lost his battle to cancer. Shapiro said the experience become a huge motivation for him to get involved in the community and give back to the less fortunate.

This semester Shapiro plans to encourage the Phi Kappa Theta members to continue their heavy involvement in community service. He says a big part of keeping up the momentum is making the events enjoyable and getting as many people involved as possible.

“We are extremely proud of their accomplishment,” Riggs said. “To be a leader in the community in such a positive way is a great achievement. At the same time, it is humbling to know how committed these men are to serving others.”