Aztecs squeak out a close win in Reno 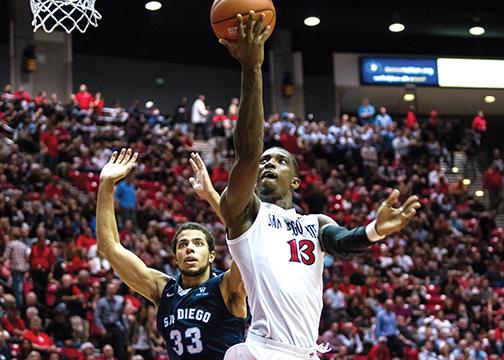 After a lackluster first-half performance by both squads, SDSU opened the second half on a 15-5 scoring run, headlined by back-to-back 3-pointers from junior forward Winston Shepard and senior forward J.J. O’Brien.

But then Nevada put together a run of its own, outscoring the Aztecs 20-14 and leaving the score at 59-53 with five minutes to go. Freshman guard Eric Cooper Jr. led the Wolf Pack’s second-half surge, scoring 13 of his 17 points in the final 17:43.

The Wolf Pack had the last shot with an opportunity to win with a 3-pointer, but senior guard Michael Perez missed a long-range jumper and junior forward A.J. West missed a potential game-tying tip-in at the buzzer.

O’Brien led the Aztecs with 18 points, 13 of which came in the second half. That’s a season-high for the senior forward — just one point shy of his career record.

Nevada’s West lived up to his billing as the best offensive rebounder in the country, grabbing seven offensive boards to go along with his 14 points.

SDSU next travels to play Boise State University (16-6, 6-3 MW) this Saturday at 3 p.m. The game can be viewed on CBS Sports Network.