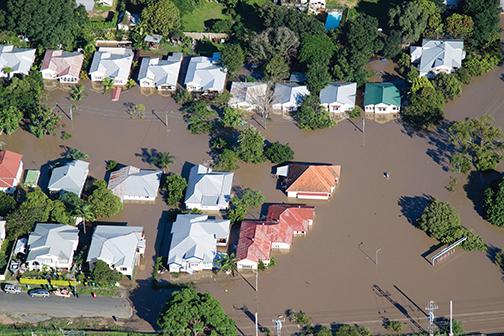 A team of San Diego State geography professors and graduate students has been developing software to assess critical infrastructure damage within minutes of a natural disaster.

Since receiving a grant from the National Science Foundation in August, the researchers have been testing software methods to extract information from photos.

The proposed software would overlap photos from a bird’s eye view taken before the disaster and after. The co-registration of these photos will highlight where change has occurred.

This is where the software would attempt to save the day.

Discovering damage in buildings that are critically needed in times of disaster, such as hospitals, is currently the project’s focus. In the event of a natural disaster, the infrastructure of these buildings may crack and collapse, causing secondary damage to the area. The researchers’ goal is to inform emergency responders about these hazards so that evacuations can be made.

“Hospitals are going to be key,” Stow said. “Say (the hospital) is damaged and people are trying to get out of it. You don’t want more people being brought to that hospital.”

Emanual Storey, an SDSU graduate student involved in the project, believes this software will be most effective in the case of earthquakes, floods and hurricanes.

“Right now the government has contracts with companies to go out (to take photos) and if a disaster happens, they can give them a call,” Pete Coulter, one of the project’s staff researchers said. “Within 48 hours, they can deliver image mosaics of the area, but that’s 48 hours into it … but with this approach, you go out and check out just the critical infrastructure and get just the information within one, two, three hours or so.”

“With unmanned aerial systems, a small amount of information can be sent out wirelessly,” Coulter said. “As the plane is flying, it is letting people know that something is going on. If you get a lot of data, you’d have to land the plane and gather the data and try to transmit a lot of data.”

Drones require minimal ground for deployment, allowing them to land and take off in settings that larger or heavier planes could not.

Through testing, the researchers discovered optimal flight elevations as well as desirable camera types and settings that minimize the margin of error.

Unfortunately, there are still obstacles that need to be hurdled before the final product can be unveiled.

The researchers are still in the dark about some of the problems they face. Shadows have become an unexpectedly tumultuous obstacle, but they are working to tackle them with a two-step approach.

“The first is to come up with ways of visualizing the features that are obscured by shadow,” Storey said. “We use information about the brightness and hue to distinguish the shadows, after which those portions of the image can be brightened for visibility or calculations can be made to estimate changes.”

But there is another obstacle that accompanies this method.

“The bizarre phenomenon that we are encountering is that the different materials within the shadows have not changed, but they respond differently to the shadowing effect,” he said. “So concrete versus asphalt would have a greater difference depending on whether it’s illuminated or not. That effect is really making it difficult to determine where actual changes have occurred because it shows up mathematically as a change.”

The researchers have two years to perfect their methodology before BAE Systems, a multinational defense, security and aerospace company build the software.

In the future, they hope to apply the software to roads, bridges and dams.

“These are just the formative steps,” Storey said. “We’re just setting up the footwork for what I think will be a part of a phase of development where software is able to identify features and changes in features on earth’s surface for many different applications…so it’s not so much about an end, as it is about making a contribution to the quality of scientific methods.”