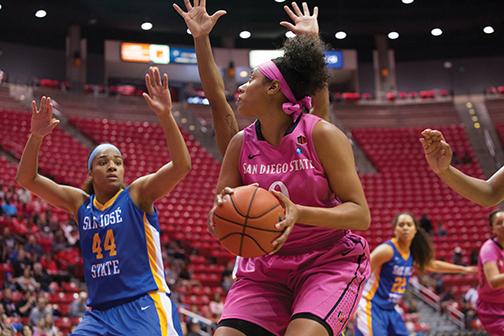 For about half of the opening 20 minutes of action the Aztecs (10-16, 7-8 Mountain West) kept up with the highest scoring team in the conference. That is when the SDSU bench took over the game and sparked a 26-7 run to close out the first half.

“I thought we played one of the best halves we played of basketball in the first half,” head coach Stacie Terry said. “I thought we did a great job sharing the ball, we had 14 assists. I thought we got great play out of Deidra (Smith) and Aleiah (Brandon) who made most out of their opportunities.”

The forward duo of junior Deidra Smith and redshirt-sophomore Aleiah Brandon, both coming off the bench, played pivotal roles in the Aztecs first half offensive outburst. Brandon — who entered the match averaging 2.0 points per game — drained her first three shots, including a 3-pointer that helped SDSU take the lead.

This match remained within one possession until Smith exerted her will against the Spartans frontcourt. In a span of two and a half minutes, she single-handily outscored SJSU 9-2, including a 7-0 run.

Meanwhile, the Aztec defense was holding its own, too, forcing six turnovers in the first 12 minutes of play.

Defense continued to lead to offense for the Aztecs toward the end of the half. A 10-point run, eight of which came off the bench, led to a 20-point halftime lead for SDSU — its largest on the season. Of the 42 points for SDSU, 20 were from Smith and Brandon.

Heading into the second half everything looked promising for the Aztecs, as senior forward Khristina Hunter tallied the first five points for either squad. But from there, the Spartans took control of the game and started to play their up-tempo style of basketball.

A 25-13 run by the Spartans, that saw the visitors cut the lead to 13 with 6:58 left, changed the atmosphere in Viejas and what looked like the complexion of the game.

From there, the Aztecs started to utilize the entire 30-second shot clock on every possession in hope that they could wind out time before the Spartans caught up. And it worked, thanks in part to nine of their final 11 points coming from the free throw line in the final eight and a half minutes.

“That was the game plan; to make sure we took as much time off the shot clock as we could,” said Terry. “I am really proud of this team.”