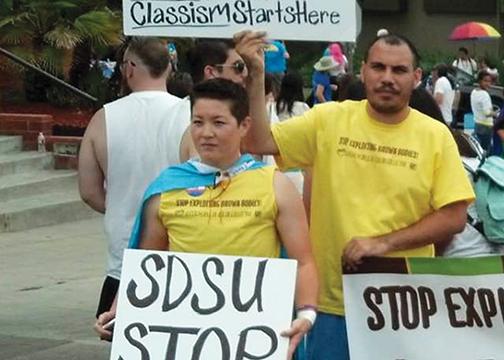 A pro bono attorney through the national Transgender Law Center is representing a San Diego State student who was allegedly asked to leave the Aztec Recreation Center in January.

A.T. Furuya, a history graduate student, said ARC staff asked Furuya to leave the men’s locker room after being yelled at by a gym member in the locker room.

Furuya identifies as genderqueer and transmasculine and uses gender-neutral and masculine personal pronouns.

“I don’t think the university is handling this correctly,” Furuya said. “When this assault happened the university’s number one priority was making sure they were covered instead of concern for my safety.”

Alison Pennington, Furuya’s attorney, believes that both Title IX and the California state law as well as the ARC policy should have provided protection to Furuya. Title IX prohibits discrimination against sex and gender in an academic setting.

“San Diego State and Associated Students already have a great policy, they both have a non discrimination policy that provide protection for people like A.T,” Pennington said. “Unfortunately that didn’t happen here and that’s really the issue.”

According to a Think Progress article, this was not the first time Furuya made it known that he felt unsafe. In November, Furuya made a request for shower curtains in the men’s locker room.

Member Services Manager Vicki Greene sent out an email on behalf of Associated Students on Feb. 11  informing students, faculty and staff that the ARC would be installing shower curtains in the men’s locker rooms to create eight single shower stalls.

“One of our main goals would be to see the university and the Associated Students take their training and policies very seriously,” Pennington said. “We have not been in direct discussions with the school yet though we would really welcome that.”

SDSU officials said they were not able to comment due to the incident still being under investigation.

According to the Pride Center’s website, support for the LGBTQ community includes Chief Diversity Officer Dr. Aaron Bruce, SafeZones@SDSU, The Pride Center, the Lavender Graduation and LGBT Aztec Alumni among others.

“My hope through all of this is that universities like SDSU will be held accountable when they fail to comply with their own policies and state and federal laws protecting transgender and gender-nonconforming students, staff, faculty and guests on campus,” Furuya said. “I want these trainings and advocacy to be a priority and not at the expense of another trans* person being assaulted to get them moving on it.”

According to a 2010 National College Climate Survey, LGBTQ students were 55 percent more likely to perceive or observe harassment compared to their heterosexual counterparts.

“I want transgender and gender nonconforming students to know they have rights and they will not be silenced or ignored when they speak out if their rights are violated,” Furuya said.