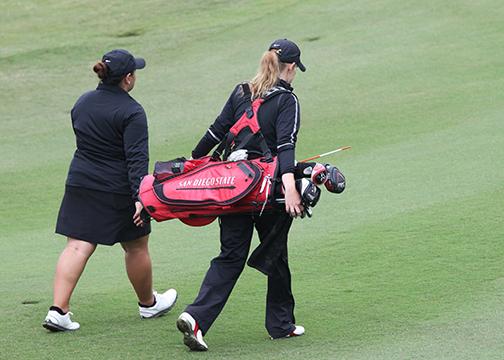 The San Diego State women’s golf team is participating in its first event of the spring today in Santa Ana at the UCI Invitational presented by Kia. SDSU is looking to build on its hot start after it claimed team victories at the season-opening Ptarmigan Ram Classic and the fall-finale Las Vegas Collegiate Showdown.

The 54-hole tournament is being held at the 5,903-yard par-72 Santa Ana Country Club. The individual winner of the tournament will be given a sponsor’s exemption for the 2015 Kia Classic at the Park Hyatt Aviara Golf Club in Carlsbad. Stanford won the Invitational in 2014 with an even-par 864 cumulative score.

Junior Emma Henrikson anchors the Aztec squad with her 72.18 18-hole stroke average and No.-38 ranking on Golfstat. Henrikson took home medalist honors at the Ptarmigan Ram Classic in September and tied for third place at the Betsy Rawls Longhorn Invitational in October.

Sophomore Sirene Blair, last season’s Mountain West Freshman of the Year, is right behind Henrikson with a stroke average of 73.09. Blair has finished in the top five twice this year in four events after posting two top five finishes in 2014, one of which came as an individual title at the Las Vegas Showdown. Her solid fall performance has earned her the No. 101 ranking to start the spring. Henrikson, Blair and the Aztecs are battling against nine of Golfstat’s top 25 players, including conference rival No. 17 senior Dana Finklestein of UNLV.

The field will play 36 holes today followed by a single final round tomorrow morning. Fans can follow the action at Golfstat.com.