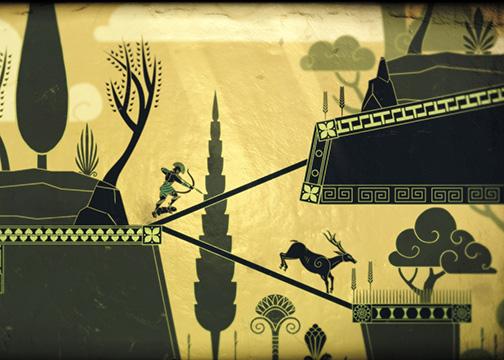 Between school, a potential job and the assigned reading that most students ignore, it can be difficult to squeeze in the time and money for video games. Luckily, PlayStation Plus members get two free games every month for each system they have. The PlayStation 4’s February duo, “Apotheon” and “Transistor,” is artsy, but only one is worth playing.

“Apotheon” is set in mythological Greece where the gods have abandoned humanity. Without their support, humanity is dwindling away as they suffer in a world that can’t grow crops, provide game to hunt and is stuck in a perpetual twilight. You play as Greek soldier Nikandreos as he teams up with Hera, the queen of Olympus, and take the gods’ powers for him and by extension humanity.

From the beginning, you’ll notice the gorgeous art style. “Apotheon” looks like the game is played on a Greek vase. The style adds to the overall atmosphere of the game and compliments the ancient Greek-influenced story quite well.

It’s difficult not to draw similarities with the other myth-based game “God of War.” The major difference is Nikandreos’ character is flatter than his 2D art style. That’s right: someone made a character less interesting than someone who simply rages for eight hours straight each and every game. Every god and goddess stays true to their origins, but then again, it’s pretty easy to take an existing character and slap some new words in their mouths to progress a story.

However, “Apotheon” struggles the most with its combat gameplay. Nikandreos handles fights sluggishly and clumsily compared to other 2D side-scrolling action games such as “Strider.” The result being incredibly cautious and timing your attacks, blocks, jumps and rolls to a tee. After a while of blocking and stabbing your way through enemies, it becomes tedious and stale.

The most fun part of playing was fighting a chimera and Nikandreos’s shield broke; the equipment is about as sturdy as soggy bread. And since Nikandreos can only carry one of each item, the challenge is increased enough to demonstrate the potential that “Apotheon” had. After my victory and being thrown into a wall by a common enemy, the game had a glitch and I died.

Verdict: Overall, this game isn’t engaging enough to hold the average person’s interest. The only exception is if you’re majoring in Greek mythology.

“Transistor” is another aesthetically pleasing game set in a futuristic dystopian city. You play as Red, a singer who had her voice stolen. She finds man impaled with a talking sword and proceeds to unravel the mystery of her missing voice, while being pursued by the city authority robots.

This is just the beginning. “Transistor” has an incredibly convoluted plot. It’ll take effort to fully grasp what this game is trying to tell you. It throws a bunch of information without explicitly stating the meaning, which makes it an engaging story. The sword named Transistor is the only voice that progresses the story. Seriously: he’s the only one who speaks, and he talks a lot. This allows for constant distance between the main characters and player from the lack of communication that slowly closes.

The story wouldn’t be nearly as effective if the city itself wasn’t engaging to explore. The city is mostly vacant, but the art style and level design brings it to life. However, “Transistor” isn’t just visually appealing. What really grabbed me was the music. The fusion between jazz, electronic and pop styles perfectly reinforce the lonely, futuristic and somber atmosphere.

The gameplay may not be perfect, but it’s definitely interesting. “Transistor” is an isometric RPG somewhere in between action and turn-based. Playing in real-time is a one-way ticket to getting slapped around. Thankfully, Red can stop the action and plan a rapid series of attack. The drawback is Red can’t attack after using this ability, which requires you to use a lot of guerilla warfare tactics to win battles. This element of strategy in an RPG is a refreshing take on the genre.

The level of customization for Red’s four attacks is deep, which promotes experimenting. As a matter of fact, dying in “Transistor” will temporarily remove one of your powers. It seems unfair at first, but it’s another way to experiment with new strategies.

Verdict: This game is a refreshing take on an old genre. Anyone who enjoys RPGs or artistic games should give this one a try.