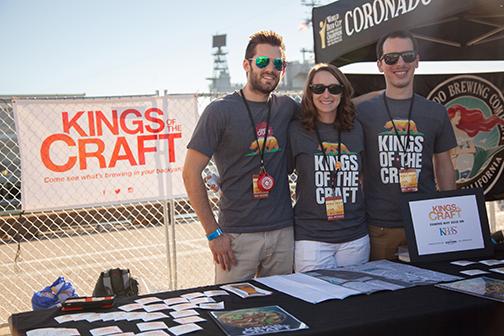 Courtesy of Kings of the Craft

Kings of the Craft, a documentary-style television series that features San Diego’s eclectic craft breweries will debut this May.

The people behind this local program are all recent graduates of San Diego State. Cinematographer Steven Moyer, Director Ben Moxley and Producer Raeanne DuPont all met during their first film production class at SDSU.

Associate Producer Eduardo Castro Fonesca was a graduate student while the rest of the team pursued bachelor degrees.

During their time at SDSU’s school of Television Film and Media the group honed their skills and determined which production roles best suited their natural talents.

The team says they face a variety of real-world challenges as they transition from an academic to professional setting.

Before the idea could become a reality, the former Aztecs had to find a platform to broadcast their creation. The team won a competition involving local public media affiliate, KPBS, to provide partial financing and an outlet for the six-episode series.

Presenting their idea to the KPBS team was a professional challenge the young documentarians had to overcome. The job of the station was to poke holes in their idea and thoroughly evaluate the project, but the Kings of the Craft team was prepared.

“We came in with a whole packet of information,” Moyer said. “Everything they asked us was something we already discussed,” he said.

The task of documenting the San Diego craft beer industry is not a simple feat. Often it demands that members of the team take on jobs that fall outside their prescribed rolls.

Moyer, the editor and cinematographer, also creates graphics and music for the show.

“I actually enjoy having a hand in all of the creative aspects of the show,” Moyer said.

This isn’t simply a show about beer and breweries. As Moyer explains, each episode explores a central theme, such as, the future of the industry or the comradery between brewers.

“It’s not meant to be a profile of any particular brewery, we want to be able to pull from each of the interviews to make sure we flesh out a theme in its entirety,” Moyer said.

The team was surprised to discover the high degree of transparency between competing microbreweries.

“One brewery was talking about open sourcing, they actually put their recipe up online,” Producer Raeanne DuPont said. “You can actually follow step by step the exact beer they have created and you can make it. What they’re trying to do is encourage your own creativity,” she explained.

Director Ben Moxley said it took time for some brewers to become comfortable speaking on camera but once they warmed up, they had a lot share.

“It’s a very open community; they’re very open people and are willing to talk about anything,” Moxley said.

The team says the idea for this show came from a desire to examine the local community. The project aims to answer questions like: “What is this industry all about and why is this happening in San Diego?”

“There’s a wealth of things to explore in this area, it would be a shame if no one was documenting what’s going on right now,” Moyer said.

But these recent alumni have made it their job to document this special local craft.

“It really comes down to the keep it local movement,” Moxley said. “It is a really clean and simple product, it has four ingredients.”

Kings of the Craft hopes to raise additional funds for the show through a Kickstarter campaign they launched this week. Their goal is to raise $30,000 during the next 30 days.

You can donate to the project through Kickstarter.com.