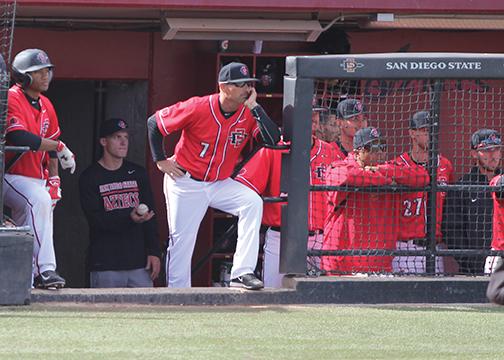 That’s how San Diego State baseball head coach Mark Martinez describes playing at the University of New Mexico, which the Aztecs will do this weekend for a three-game series.

Martinez said these weird sounds have to do with the acoustics surrounding the field and can have an adverse effect on the defense trying to read the ball off the bat.

This isn’t going to be the first go-around at New Mexico for many of the SDSU starters, though.

“The majority of our lineup has been there, so they know what to expect,” Martinez said. “They know the intricacies of the park, like how it plays like a vacuum and how the ball sounds weird off the bat. Now it just comes down to being mentally tough and winning a ballgame.”

Wining a ballgame did not come easy for the Aztecs against New Mexico last year.

The Lobos took two out of three in the one series the teams played last year, but the Aztecs took the game that counted the most, an 11-5 win in the Mountain West Tournament.

As for as a rivalry game, Martinez holds the same sentiment for New Mexico that he does for all Mountain West teams.

“There’s not a whole lot of love lost between the teams in this conference,” he said. “Between the lines we don’t like them. Outside the lines it’s a classy program that is well coached.”

These veterans have helped accumulate a team batting average of .320 and an ERA of 3.86, despite a rocky start from the bullpen.

“These guys have been there, they’ve been in the heat of the battle,” Martinez said.

Martinez will make a minor change to the Aztecs starting rotation this weekend.

Martinez plans to start sophomore right-hander Cody Thompson instead of sophomore left-hander Brett Seeburger (5.06 ERA) who has struggled to start the season.

However, Martinez noted that Seeburger would provide much needed lefty depth in the bullpen and hopes that he can work his way back into the rotation.

A player to watch on New Mexico will be sophomore first baseman Chris DeVito, who currently leads the team in batting average (.333), home runs (2) and hits (11).

Even though the Aztecs (11-1, 3-0 MW) are off to their best start since 1984, Martinez does not believe his team has a “target” on its back and approaches every game the same way.

“It’s going to be a dog fight, it always is with Mountain West Conference games,” Martinez said. “Our goal never changes, we want to go out there and win a ballgame. Rankings and stuff like that are not a concern to us.”