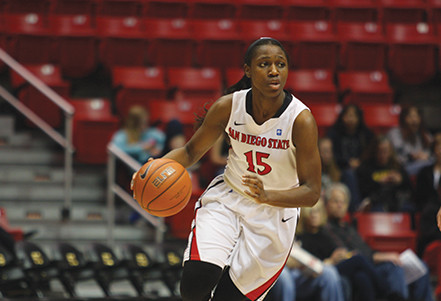 The San Diego State women’s basketball team wrapped up regular-season play on the wrong side of a defensive battle Friday night, upended by the University of Nevada, Reno 50-44 at the Lawlor Events Center.

This match held little significance to either team, as both the Aztecs (11-18, 8-10 Mountain West) and Wolf Pack (9-20, 5-13 MW) already secured the No. 7 and No. 10 seed, respectively, heading into this contest for the 2015 MW Tournament. It was a chance, however, for the two teams to size one another up, as they are slated to play this Monday in the first round.

SDSU has some housecleaning to do before its next tilt with Nevada. Of the 44 Aztec points, freshman guard McKynzie Fort and senior forward Khristina Hunter accounted for 33 of them, with the bench only tallying three points.

The red and black once again came up empty from beyond the 3-point line, missing on all six of its attempts. Nevada also held the edge in rebounding 39-30. But the Achilles heel for the Aztecs came at the free-throw line where the Wolf Pack went 20-30, including a 17-25 outing in the second half.

Defense was at the forefront in this match, especially in the first half. Neither team shot well in the opening 20 minutes as neither the Wolf Pack nor the Aztecs topped 32 percent.

Fort and Hunter were the early sparks to the SDSU offense combining for the first 10 Aztec points on 4-5 shooting through only four minutes of action. However, they were quickly reminded why Nevada is No. 2 in field goal percentage defense in the conference as the Aztecs went 3-19 from the field for the remainder of the half.

Fortunately for SDSU, its defense was up to the task and was in the pocket of the Wolf Pack’s shooters the entire first half. Nevada scored nine points in the first six minutes of play, but would not score for almost four minutes facing a 13-9 deficit.

Even with stellar defensive play, the lack of offensive output by the Aztecs created an opening and the Wolf Pack sprinted on an 11-3 run to what looked like a 20-16 lead heading into halftime. But just as the half was coming to a close, redshirt-junior Erimma Amarikwa was able to drive in a layup off of a steal in the backcourt to create a one-possession gap.

The Aztecs began the second half similar to the first, successfully finding the bottom of the net. That translated into an 8-3 run, taking their final lead of the game at 26-23. Hunter and Fort were again the two behind this rare outburst, with the senior draining six in that span.

That is when the fouls for SDSU started to pile up and Nevada settled in at the free-throw line going 7-9 that resulted in an 11-0 run for the Wolf Pack with 13 minutes left in regulation. Nevada continued to build on their lead for the next six minutes and took a 10-point lead.

Unfortunately, the Aztecs did not threaten until the final minutes, cutting the lead to four on four occasions. But nine free throws in the closing minute were enough for the Wolf Pack to stave off SDSU.

These two teams face off Monday, March 9 in the MW Tournament at 4:30 p.m. at Thomas & Mack Center in Las Vegas.