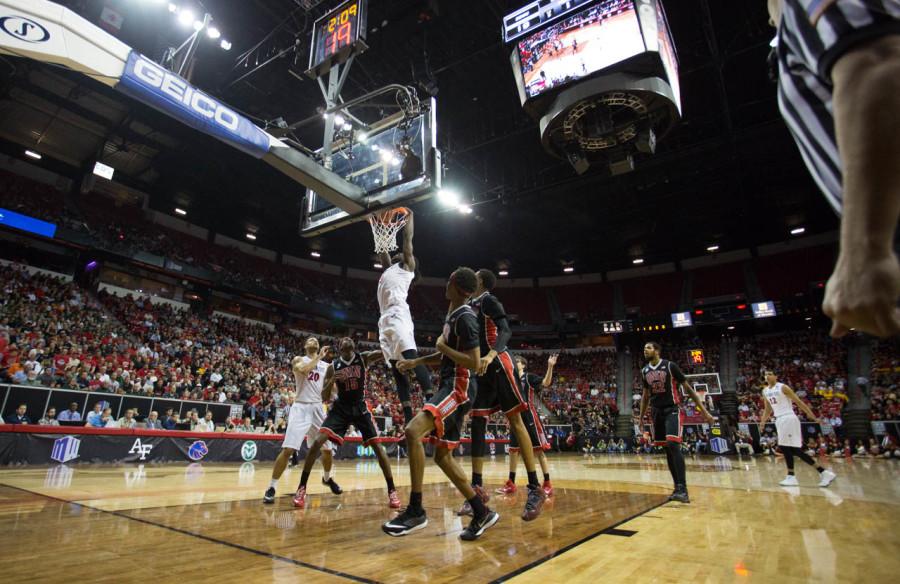 by Kristian Ibarra and Matthew Bain

What home-court advantage and gritty play can do for a team that entered a conference tournament as the No. 7 seed facing the No. 2 seed.

After 40 minutes of play, the second-seeded San Diego State Aztecs left the Thomas & Mack Center in Las Vegas as the victors of a 67-64 game against the seventh-seeded University of Las Vegas, Nevada Runnin’ Rebels.

The game didn’t always seem to be going SDSU’s way, though. Troubled by the physicality of UNLV sophomore forward Christian Wood, the Aztecs entered the half facing a six-point deficit.

“(UNLV) moved (Wood) into different spots tonight to make him hard to guard, and he was hard to guard,” SDSU head coach Steve Fisher said. “He was a load for (us) today.”

“When we came out (for the second half) we came out as a unit,” Quinn said. “(The first half) was not Aztec basketball.”

Quinn entered the game having averaged 11 points on the season, while scoring 12, seven and seven points in his last three games. He walked off the court Thursday night with 21 points to his name, going 5-6 from 3-point range and 8-10 from the field.

The Aztecs were also aided by the offensive output of senior forward JJ O’Brien, who managed to net 15 points to complement his four-rebound performance.

Amid an arena filled with equal parts Aztec fans and Rebels faithful, SDSU shot 18-28 from the free-throw line.

“We have the greatest fans imaginable…and they travel,” Fisher said. “Our fans are here and they’re not going to miss a game.”