Love at SDSU: Long-lasting love in the fast lane 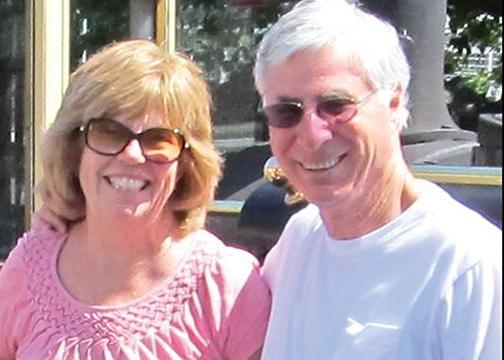 Courtesy of the Abrams

Throughout history, there have been several couples that owe their love story to San Diego State, but Ann and Marv Abrams are not one of those couples. Although both attended SDSU simultaneously, their love story did not begin on campus.

Ann and Marv Abrams met at a staff meeting when they were both employed during their junior and senior years with the City of San Diego as recreational leaders.

“I had quite a crush on him, but I didn’t know he was interested in me until I had planned a trip to Europe, and he asked me out right before I was going to leave,” Ann said. “The rest was fast and furious from there.”

Both Marv and Ann Abrams graduated in 1969 and were married shortly after in 1970. Ann was a transfer student from Prescott, Arizona who first attended Whittier College before attending SDSU. Ann received a bachelor’s degree in English from SDSU before receiving her teaching credential. Soon after, Ann decided to change her career path and received a master’s degree in social work from SDSU.

“I had found my two years at Whittier to be very limited,” Ann said. “If I hadn’t gone to San Diego State, I’d probably be a Republican instead of a Democrat.”

Marv was a San Diego native who received both his bachelor’s and master’s degrees in political science from SDSU, and later received a doctorate in educational leadership from Northern Arizona University. During his undergrad, Marv was involved with the Model United Nations and became president during his senior year. Marv was also involved with The Daily Aztec from 1965-1969, when the system was entirely different than it is now.

“Back then, The Daily Aztec was the lab class for the journalism department,” Marv said. “All of our stories were graded and on carbon paper, but we did get priority registration, which was a regularly a difficult task unless you were at least a junior.”

During the time Marv was working with The Daily Aztec, freshman and sophomore students were not permitted on staff. But Marv found a way around the rule by serving in various writing and editorial positions. Marv later received the Gold Press Car award from the then-Daily Aztec adviser Eric Odendall.

“I consider SDSU to be been the greatest possible experience I have ever had largely because of my involvement with The Daily Aztec,” Marv said. “Without all of that training beforehand, I don’t know what I would have done in my later career.”

Ann remembers everything about the 1960s and Steinbeck expert Dr. Benson, a former professor of SDSU.

“So much was going on during that time, and everyone was so political, unlike me,” Ann said. “My goals changed throughout the years, and my life is completely different from what I thought it was going to be during college.”

Ann spent the bulk of her career in medical social work, but is now a retired educator from University of California, Irvine after 32 years. Marv spent 34 years as a school administrator and teacher in both Orange County and Los Angeles County. Before retiring, Marv worked as a university professor at Brandman University.

Ann and Marv Abrams had two children, Janet and David. David is also an SDSU graduate and now works for the City of San Diego.

Marv and Ann will have been married 45 years this June. Ann and Marv advise couples attending SDSU now to pay attention to and support each other’s growth, even when it’s not the easiest thing to do.

“You have to be ready for change,” Ann said.