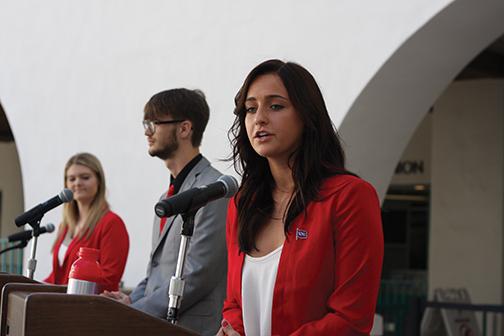 The three candidates for Associated Students president showcased their plans to empower the student voice, unite the campus and address student concerns at Thursday’s presidential debate.

Sexual assault, university spending and transparency between students and staff were among the main topics of discussion at the Conrad Prebys Aztec Student Union.

This was the final chance for Chelsea Baer, Blaire Ward, and Jeremy Zaida to publicly discuss their candidacy before voting begins March 16 on Webportal.

Each candidate acknowledged the school’s progressive decision to enroll the Greek community in preventative sexual assault training, and agreed that this opportunity should be opened up to all students.

Ward said she plans to increase marketing for these workshops, and an upcoming university survey on sexual assault. She also advised students to read about Title IX, which prohibits sexual discrimination at federally-funded campuses.

Zaida emphasized a need to clarify the university’s stance on sexual assault.

“This school needs to have an official policy statement toward sexual violence that is written down and has an official definition of the meaning, how prevalent it is on this campus, the circumstances in which it commonly occurs, what to do if it happens, any sanctions or campus resources, and prevention strategies,” he said.

Baer emphasized safety as one of her main concerns on her platform. Part of that, is ensuring that every student feels safe on campus, she said.

Divestment, the act of retracting an investment, has been a hotly controversial issue between students. Zaida passionately debated against some of the university’s expenditures, calling for divestment.

“I don’t think that we should be putting our money that has been given to the school toward investing in companies like oil companies, gas companies, coal companies that can worsen the effects of climate change and pollution in our environment,” Zaida said. “I also believe as a matter of principle, this school should not be involved or taking sides in the Israel-Palestinian debate.”

Baer said her stance is neutral toward divestment because she said it is not the role of president to take sides, and that, as a whole, the student body is not educated enough on the topic to make a decision.

“I believe that the role of president is meant to inform students and present the facts for both sides and allow students to make the decision and allow their voice to be the final decision-maker,” Baer said.

During Zaida’s rebuttle, he also expressed his support for open conversations on the matter.

Both Baer and Ward were active members on the Student Success Fee advisory board and expressed their support for the additional funding it provides. Zaida applauded the fee’s ability to provide more classes and to re-hire tenured staff, but he also called for increased transparency. As a solution, he suggested that each student have the chance to vote on similar initiatives, rather than using focus groups.

At one point, candidates were asked which issue they would most heavily focus on during their presidency. Baer said that she would strive to use A.S. funding to enhance the Aztec experience in areas that students don’t believe they can afford.

“It’s expensive to live here, it’s expensive to study here,” Baer said. “However, it’s holding back a lot of students from studying abroad and there is so much funding that doesn’t get used and there are ways they can fund themselves (through these funds).”

Zaida enforced that his goal would be to encourage divestment in companies that negatively affect our environment and involve us in Middle Eastern conflicts. Instead, he advocated a stronger student voice in financial allocations.

“The first thing I believe we need to fix is we need to eliminate food insecurities … I am going to press for that so all students feel they can have a meal throughout the day,” she said. 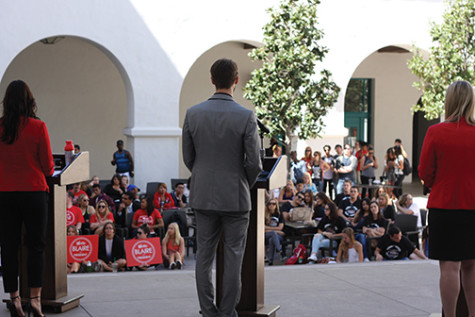