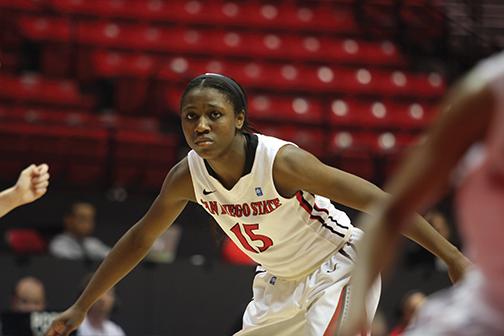 The 2014-15 San Diego State women’s basketball team is not cutting down any nets; they did not receive any postseason bids or end the season with a winning record.

This season was not pretty and at times it was difficult to watch, however, these women never stopped fighting. Even when the excuses (no superstar, offensive deficiencies and a freshmen class that never lived up to the hype) were the ideal scapegoat to quit on this season.

This never-say-die mentality was clear every time they stepped foot on the court, but consistently poor 3-point shooting and a lack of a star player haunted the Aztecs all season long.

As for the starless problem both redshirt-junior forward Erimma Amarikwa and freshmen guard McKynzie Fort ended the season averaging over 10 points per game; however, if you kept track of this team you would know that although both are solid players, neither could take over the game on a consistent basis, especially with the lack of floor spacing.

Amarikwa was able to hit the occasional mid-range jumper, but was most comfortable in the post. Unfortunately for her, so did many of her teammates, which clogged up the paint. The same went for Fort who always looked for the soft spot in the defense, but was usually met by a wall of defenders on her drives to the basket.

Nevertheless, the Aztecs headed into the Mountain West Tournament with their sights set on a championship.

In its season opener, SDSU hit the road running against California State University, Sacramento in a game that could have been easily mistaken for a track meet as neither teams’ defense bothered to make an appearance. In hindsight this game foreshadowed what was to come for the Aztecs: poor ball handling, no perimeter game to speak of and no go-to player.

This was also the first time SDSU had a winning record under second-year head coach Stacie Terry at 1-0. Unfortunately, it would be the last of this season.

The next three games were hard to swallow for Aztec fans as SDSU dropped each by double-digit margins, including an 89-38 loss on the road against the Associated Press No. 2 University of South Carolina.

They went on to the San Juan Shootout in Puerto Rico where they split their two games, losing to the University of Michigan where they were bombarded with a barrage of 3s and dropped to 2-4 on the season.

After some much-needed rest and relaxation for the Aztecs, the University of California, Santa Barbara was sent packing with a loss.

However, the following stretch for SDSU was what coach Terry described as one of the lowest points of the season for her and the team. The next four games were the worst stretch under Terry’s time at the helm, losing on average by 16 points and all by double digits.

Heading into conference play the Aztecs were sporting a 3-8 overall record, with all eight losses coming in double-digits. To make matters worse the freshman class that was highly touted at the beginning of the season began to show their flaws, aside from Fort who already established herself as a starter. Freshman guard Cheyenne Greenhouse was stripped of her starting position while freshman forward Lexy Thorderson was struggling just to see the court.

Despite their struggles the Aztecs, were able to secure the win against Air Force Academy and notch their first road win on the season.

The women were quickly humbled, dropping back-to-back games against the California State University, Fresno and University of New Mexico.

The Aztecs would go 2-1 in the win-loss column during their next three matches defeating Wyoming and Air Force at home staggered with a loss to the University of Nevada, Las Vegas at Thomas & Mack Center.

After the victory against the Falcons, SDSU improved to 6-11 overall and 3-3 in MW action. SDSU then found itself in a slug match with the top-seed Colorado State University where neither team could buy a basket.

The Aztecs scored a season-low 36 points, where Fort and Amarikwa tallied 20 of those points.

SDSU would then travel to Fresno for a rematch against the Bulldogs, but the result was the same as the ladies in red and black could not overcome a 17-8 edge in made free throws, losing 57-50.

After a drubbing of Utah State for their second, and final, road win of the season, the Aztecs —7-13 overall record, 4-5 in conference play — finally captured that elusive back-to-back victory with a win against Nevada. In what was the highlight of the season, SDSU toppled Boise State University in Viejas to extend their win streak to three. The Aztec defense suffocated the Broncos offense and limited them to 26.4 percent shooting on the night.

What looked like a turning point for the Aztecs, turned out to be a flash in the pan as they dropped their next three games and fell to 9-16 overall, and 6-8 in the MW.

The Aztecs would end the final four games of the regular season trading wins and losses.

Terry will have two starters return next year, guards redshirt-junior Ahjalee Harvey and Fort, as well as hand the reins to the frontcourt over to junior forward Deidra Smith and redshirt-sophomore forward Aleiah Brandon.