Keep ineffective fans off the court 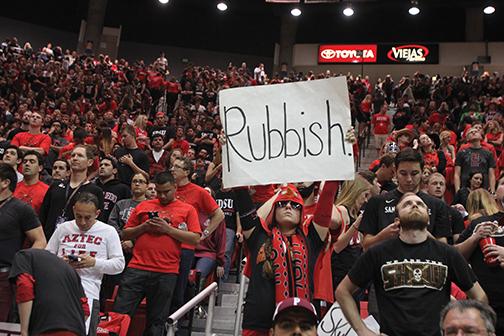 This will be one of those opinion-based columns readers have come to hate. It’s about as welcome of an argument as writers mashing keyboards in anger about Daylight Savings Time. Yet, here is the topic nonetheless: Court storming season is upon us once again, and it’s just as dumb as it has ever been. It’s time to retire the annual rhetoric, because it’s time to stop allowing fans on the floor.

The most obvious reason is that someone is going to get hurt. It’s also the most boring. Every columnist has already written that think piece. But most of them are thinking about it in the wrong way. Since the potential for injury is prevalent in every sporting contest, the argument isn’t all that compelling. The best reason to retire court storming is because it instills the false belief in fans that they matter. Quite simply, they don’t.

A home team’s dominance has more to do with the other team being forced to travel than it does almost anything else. Look at almost any team’s record and its home record will usually be better than its road record. This is true at packed-to-the-rafters Viejas Arena, and it’s true at quiet-as-a-church Save Mart Center at California State University, Fresno. Speaking of, remember when San Diego State lost at Fresno this past January? Remember seeing all the empty seats? All four Fresno fans in attendance surely didn’t inspire the Bulldogs that day. The sixth man was most likely every Bulldog’s own bed that gave him a good night’s rest. It’s strange, then, that I don’t remember seeing Tempur-Pedics bum rushing security guards to get to the floor of the Save Mart Center.

If it’s about the fans, then how does one explain this year’s home loss against Boise State University? Those in attendance tweeted continuously that Viejas was as loud as it’s ever been. If loudness matters, if fans dressing in T-shirts matter, then the Broncos were toast before the team bus even chugged up to the Mesa. A funny thing happened after that bus got to its destination: The Broncos won by double digits. What’s the opposite of rushing the floor? Flooding the exits, as that’s what “The Show” did before the final buzzer sounded.

Despite what the team tells its fans, despite what an overzealous public relations department spits out, fans matter little at home. It’s likely the Aztecs would boast the same sterling home record if it played in front of 124 fans instead of the 12,414 fans who regularly attend. Otherwise, how can one explain championship-level teams that play in front of sparse crowds, such as MLB’s Tampa Bay Rays? Better yet, how does the Aztec football team ever win a game at cavernous Qualcomm Stadium?

Where fans do matter is in the pocketbook of the team’s ownership. They need fans to buy tickets, food and souvenirs. That’s it.

Lest I be accused of beating a dead horse, let’s travel up the I-5 to look at one more example of fan irrelevance. Fans of the Seattle Seahawks are famous for their noise. Announcers say over and over that the ear-shattering decibel level forces opponents to play scared. Yet those fans didn’t just start screaming two seasons ago. They’ve been screaming for years, and often in front of non-playoff qualifying squads. Seattle’s streak of NFL superiority isn’t from large lung capacity; it’s from having the right roster.  Otherwise, they’d be just as forgotten as the Kansas City Chiefs, whose fans regularly compete with Seattle’s in terms of loudness.

So the next time you are at a game and thinking about rushing onto the floor, ask yourself these questions first: How many points did you score, and how many rebounds did you haul in? If the answer is zero, then that’s how many steps you need to take where actual athletes tread.