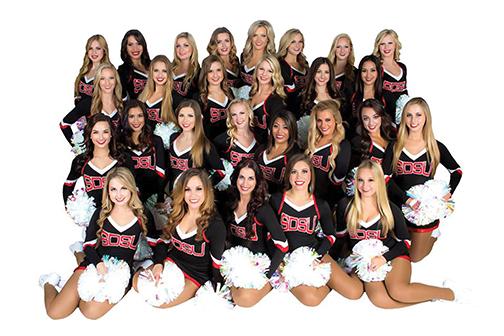 Courtesy of the SDSU Dance Team

Most San Diego State students have seen the dance team perform at football or basketball games, but what many students don’t know is that the team is nationally ranked. This season, the dance team has battled long hours of practices, several injuries and other collegiate competitors to rank No. 4 in the jazz category and No. 7 in the hip-hop category at the 2015 Universal Dance Association National Championships.

The SDSU dance team, led by Coach Carrie Smith for five consecutive seasons as well as Dean Cortez and Kaitlin Collins, has a total of 27 women. The team has only been competing at the UDA competition for three years.

“It’s a great feeling to be part of a team,” communications sophomore Karah Del Cont said. “The dance team is a great way to get to know people and it makes the school seem much smaller.”

The Universal Dance Association National Championships is the largest collegiate dance competition in the nation, and to place within the top five teams at the awards ceremony is a great honor. The UDA, which was held in Florida this year, is a three-day competition that features warmups, a preliminary round and a final round.

“The easiest way to describe the competition is intense,” Emily Davidson, co-captain and speech, language and hearing sciences senior, said. “The preliminary round is the scariest because you have to rank better than half of the teams to make it into the finals.”

“Not making it into finals was probably the most humiliating thing that has ever happened in any of our lives,” Davidson said.

“When you’re just sitting in a room waiting for your name to be called, it’s nerve-wracking,” Del Cont said.

However, at this year’s competition, not only did the dance team make it into the final round, but they entered it in sixth place for both categories, out of 26 teams in the jazz category and out of 16 teams in the hip-hop category.

Perks of being a UDA championship top five team include a name recognition boost as well as the opportunity to be featured on ESPN.

On top of practices, sports events and competitions, the dance team also completes numerous community service events throughout the year. This weekend dance team will compete at the United Spirit Association’s Collegiate Championships.

The dance team practices for hours every week to make sure everything is perfect. Davidson said there was a huge change in the team’s work ethic because everyone wanted to win so badly. Compared to being fairly unknown among programs throughout the country before their January win, they are excited about rising in the rankings.

“We’ve become a program to watch out for,” Davidson said. “To go from being an underdog to making top five is a huge accomplishment.”