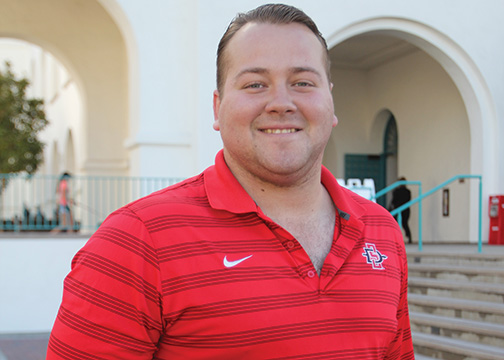 He wears a suit and tie, holds his head high and greets almost everyone passing on campus. His name generates a buzz and has impacted everyone here at San Diego State. However, because there was only a 9.9 percent voter turnout for last year’s school elections, not everyone may know who he is. As his term in Associated Students comes to an end, finance senior Jonathan Cole smiles as he reflects on his accomplishments as president and the growth he has had as a person throughout his college career.

As a freshman, Cole highlighted the importance of leadership and student collaboration. He was initially enrolled in the leadership minor program that was cut spring 2012 because of funding issues, which ignited his drive to revive it.

“J. Cole is a great leader because he really values mentoring — both learning from and teaching others,” A.S. Vice President of External Affairs Jacqueline Karczewski said. “He is very good at looking into the future and forward thinking.”

Throughout his term, he focused on renewing the leadership minor, increasing mentees in the Aztec Mentor Program by 52 percent and pushing for the concept of a co-curricular transcript, which gives students the opportunity to document involvement outside of the classroom. These initiatives were his main goals during his presidency.

Each of these allow students to get their foot in the door and succeed in life after college. Not only has he created multiple platforms for students to thrive, but he has also been able to utilize and benefit from them, proving the prosperity of the implementations.

The Aztec Mentor Program paired Cole with a mentor who connected him to a potential opportunity to get his dream job at Creative Arts Agency in Hollywood. His goal is to represent professional athletes or actors and encourage them to create non-profits to give back in areas they are passionate about, therefore making a wide impact.

Although his checklist is admirable, there is so much more to Cole than just his accomplishments and work ethic.

“J. Cole has a very unique ability to energize a room,” international security and conflict resolution senior Alex Nelson said. “I remember being in a Rotaract meeting with J. Cole and he had to contain himself from talking to every single person in the room. I think that speaks to his extremely outgoing and friendly personality.”

Shockingly, Cole said he wasn’t like this when he first came to SDSU. He actually felt depressed and had mixed emotions about coming to campus.

In high school his passion was football, where he excelled as middle linebacker. He was recruited from Ivy League schools such as Yale and Princeton, only to have those scholarships fall through. Cole only ended up having one acceptance to go to college: SDSU.

It was difficult for him in the beginning. He explained how he was not chosen his first time running for A.S. and how football didn’t work out at first either. That’s when he said he decided to change his attitude and make the best of it.

He developed a mentorship with former A.S. President Cody Barbo, who helped situate Cole into different facets of campus, as well as becoming a member of Sigma Phi Epsilon. Cole said this is when he gained the appreciation for what SDSU had to offer.

“It’s cliché but, what I’ll miss the most is the people, the students,” Cole said. “We have students who are extremely driven, extremely hungry. We have a lot of students who come into college with a chip on their shoulder and with something to prove. Continuously surrounding yourself with people who are so motivated and so impressive — I’m going to miss that — and being surrounded by people who just elevate you. You can’t help it you’re always surrounded by people who make you better. I’m going to miss that the most — besides basketball games!”

As for what the future holds, Cole said that when he is retired, he hopes to be able to give back to his hometown. He wants to build a center for children to teach leadership and entrepreneurship.

He said it’s easy for kids to stray, and he wants them to connect through seminars. Additionally, he would love the opportunity to coach high school football to be able to come back, full circle, where his first real passion began.