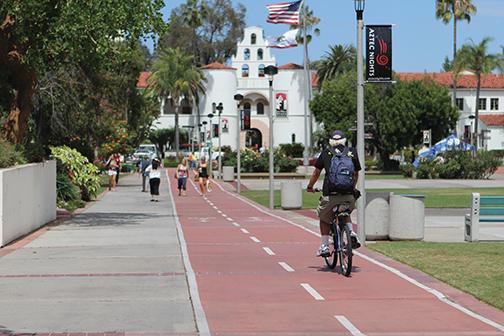 A bike impound policy implemented in December of 2013 has not decreased the amount of bikes that are locked up on campus away from bike rails, according to San Diego State Parking and Support Services.

SDSU students received an email on March 16 reminding them to lock bikes on bike racks or else face a $50 impoundment fee. The impound policy and fee was introduced to increase safety, as well as provide funds for more bike racks.

However, the policy hasn’t helped lower the amount of bikes locked in areas other than bike racks, Director of Parking and Support Services Debbie Richeson said.

“There are bike racks throughout campus not being completely utilized,” Richeson said.

When the bike policy was first introduced, the impound fee was supposed to help provide funds to install 50 new bike racks on campus, but that has not happened.

“There was not enough money collected due to the few impounds,” Richeson said. “However, the campus has added more where we can. We added more down by Storm and Nasatir halls and the library.”

Bike rider and kinesiology sophomore Delaney Cummings said it is unsafe to lock bikes in areas that are not bike racks.

“You don’t want bikes on any kind of handrail because people need that to walk, and then it’s a safety hazard if there’s a bike impeding their need for the handrail,” she said. “I don’t know if people just don’t think about it in the forefront of their mind that their decision is inhibiting someone’s way entirely, and I don’t think that’s the thought they have when they’re late to class and just try to lock it up really quick.”

Richeson recognizes students may be locking their bikes in other areas because there is no guarantee a bike rack space will be available at the building the student is going to.

Richeson advises students to seek other locations that are not full when parking their bikes on campus.

“The university will continue to assess where we can try to lessen the impact, but this needs to be met with the understanding bicyclists may not be able to park where they want at times,” she said.