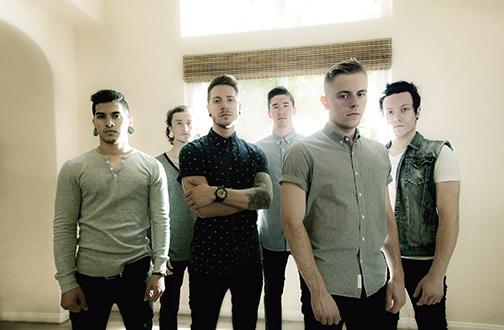 San Diego has produced more than a few post-hardcore bands. There are In Fear and Faith, Secrets, Pierce the Veil and so on. Outlands hopes to be the next act to rock the world with its mixture of catchy choruses and screams, and heavy instruments with the occasional breakdown.

Formally known as Oh, Guardian, the band changed its name to Outlands a little more than a year ago. As of now, it only has one song, “Everything But Me,” released. Although, a full 11-song album — the title isn’t ready to be announced yet — should be on its way around May.

“You can consider it hardcore with the hookiest hooks,” vocalist Jordan Garza said. “The album is going to be more of our heavier stuff in the beginning and then the way the story goes, it turns into more of the emotional stuff toward the end.”

Garza said in addition to the band’s talented drummer and string players, being a dual-fronted band, where one vocalist screams and the other sings, allows the group to go wherever it wants with its sound.

The band just finished touring with Kingdom of Giants and Indirections.

“The tour was amazing for our first tour,” Garza said. “We played some smaller venues, but the people who were there loved our band. Even though they don’t love our music, they were jumping when we were telling them to jump. They were dancing around. Everyone was having a good time. Even though they weren’t the biggest shows, every show was worth it.”

The rest of the country was in the midst of an intense snowstorm, so the weather proved to be an issue for a portion of the tour.

“We didn’t check the weather report and didn’t know what the weather would be like,” Garza said. “So being San Diego kids, we packed light. We each had maybe a light sweater as the heaviest thing we packed. It started raining really hard when we were in Texas and when we had to go to Oklahoma, Oklahoma was having an ice day. So from Texas to Oklahoma, the whole way, we had to drive about 25 mph on the freeway. It was all just ice, going 25 mph, sliding left or right down the freeway.”

In one instance, the lock for their equipment froze right before a show, Garza said. The band had to poor hot water on it to free its equipment.

Outlands is currently waiting for its next album to drop and go back to touring. In the meantime, members are staying busy by writing new music, recording a music video in April, doing some promos, getting new merchandise and, of course, practicing. In between all of that, they’re trying to exercise and eat right.

“We’re staying in shape and eating healthy because when you’re on tour and you’re playing every day, it hits you,” Garza said. “You gotta stay in shape to be in a hardcore band. Once you start jumping on stage, you gotta act like you’re not tired. You can’t eat burritos and hamburgers every day.”

Once the album gets released and the band goes on tour, Garza promised the group would definitely make San Diego a destination.

“Be patient because really big things are coming,” Garza said.