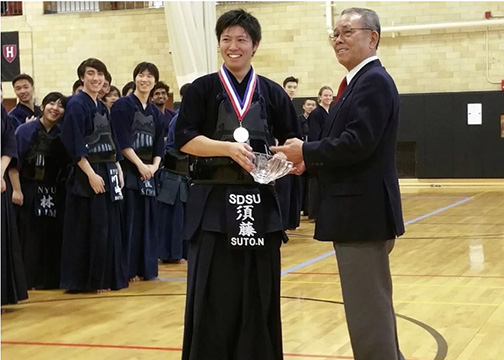 His bare feet lunged across the wooden floor, tickled by the edge of his full-length, black outfit that swung in sync with the bamboo sword in his hands.

In one quick motion, he jabbed his opponent with his sword, or Shinai, and scored the final point of the match. Grinning underneath his uniform’s metal mask, linguistics senior Naonori Suto became the 19th champion of the Annual Harvard-Invitational Shoryuhai Intercollegiate Kendo Tournament.

On the weekend of March 21, this end-all point also made Suto the first SDSU student to win the tournament’s individual competition, beating more than 200 students from across the country.

“During the match, I’m always trying to figure out the best way to win,” Suto said. “No special tricks. I see the opponent’s way to block. I observe them the first 30 seconds, and then I try something.”

Kendo, a form of Japanese martial arts comparable to fencing, has been a prominent part of Suto’s life since he began practicing it nine years ago in his hometown of Gunma, Japan.

While studying abroad at SDSU for the last three months, Suto has used the Kendo Club at University of California, San Diego to connect with his native culture.

Although kendo is a modern adaption of Japanese wartime swordsmanship, respect and humility have always been its core teachings.

“We are fighting, but we respect each other,” Suto said.

“If one person is always domineering, neither person is learning anything,” he said. “If you take away all of the violent aspects of it, what is left is the supportive features of martial arts. It’s a vehicle to help cultivate our good human characteristics to lead to a better society.”

“Even though there is a competition aspect, my philosophy is that kendo is also about making friends, meeting new people, and going new places,” he said.

This rings true for Suto, who met his best friend, Matthew Padrigan, through kendo in Gunma.

“From my acquired knowledge of Samurai and Japanese culture, on and off the battlefield, your opponent is not an enemy, but almost a friend,” Padrigan said. “You shouldn’t cheat them, because we don’t expect to be cheated either.”

Suto refers to kendo as a mentality just as much as as he refers to it as martial arts.

“I think kendo is making me who I am,” Suto said. “Maybe without kendo, I am not here.”

There are no age restrictions in kendo, so Suto said he does not plan to quit.

The All Japan Kendo Federation instills these morals in students early on by introducing them to a modern take on the sports’ purpose, which is:

To mold the mind and body,

To cultivate a vigorous spirit,

And through correct and rigid training,

To strive for improvement in the art of Kendo,

To hold in esteem human courtesy and honor,

To associate with others with sincerity,

And to forever pursue the cultivation of oneself.

This will make one be able:

To love his/her country and society,

To contribute to the development of culture

And to promote peace and prosperity among all peoples.