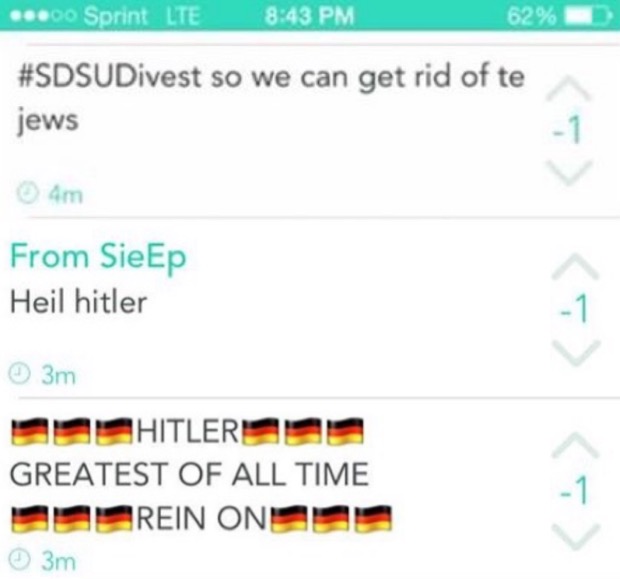 For many modern day Jews across the world, April is a time to reflect upon the historic perseverance of the Jewish people in the face of adversity and hatred. April 15 marks the remembrance day of Yom HaShoah, otherwise known in Hebrew as “Day of the Holocaust.” An eight-day period of Passover commemorates the liberation of the Israelites from slavery in Egypt, while April 19 is spent in remembrance of the Warsaw Ghetto Uprising.

Regardless of the time and place of these occurrences, today’s society offers a safe space for the Jewish community to remember a dark history, from which their people have survived. During this remembrance, one hopes reminders of the extreme anti-Semitic attitudes used to justify the persecution of the Jews are never repeated.

This past week, as the San Diego State Jewish community celebrated Passover and prepared for the Holocaust memorial “Walk to Remember” where they witnessed the rebirth of ancient racism. Students were shocked to discover various anti-Semitic posts on the anonymous geo-social app Yik Yak, making statements such as “Heil Hitler” and “SDSU Divest so we can get rid of the Jews.”

As an institution whose mission statement states how SDSU was founded on the values of an “appreciation for diversity” and “mutual respect,” it seems odd these anti-Semitic posts only sparked a reaction from the targeted group. There is a deafening silence on our campus with no condemnation of this anti-Semitism from the administration, nor any condemnation from the student government.

While these posts landed on an anonymous social media app, the simple existence of this sentiment on campus generates a substantive fear for not only Jewish students, but all students.

This campus can’t remain a safe place for all if hatred exists to target a group of students. If we allow anti-Semitism to go unchecked, there will be destructive consequences that normalize hatred against other minorities.

“As a Jewish student on this campus, and the grandson of Holocaust survivors, I was disgusted and horrified by the anti-Semitic comments on Yik Yak,” Kagan said. “It was shocking to see how even on an anonymous forum, students were comfortable to spread such hatred and even went as far as praising Hitler.”

Within the context of rising anti-Semitism on college campuses across the nation, this fear is tangible and real. We’ve recently come to witness a Jewish student at the University of California, Los Angeles be questioned of her legitimacy to hold a position in student government when she was asked, “Given that you are a Jewish student and very active in the Jewish community, how do you see yourself being able to maintain an unbiased view?”

Anti-Semitic incidents on other college campuses, however, have taken a more brutal and violent form. Neili Eggert, a Jewish student from the University of North Carolina was reportedly told to go “Burn in an oven” when she demonstrated her support for Israel. Eggert further revealed she was spat at and called a “Christ killer,” a “woman killer” and a “terrorist,” among other violent epithets thrown at her.

Anti-Semitic incidents have further been recorded at multiple academic institutions such as University of California Davis, Pennsylvania State University and Temple University.

A recent survey conducted by the Trinity College and the Louis D Brandeis Center for Human Rights Under Law found 54 percent of Jewish students experienced anti-Semitism on campus during the first six months of the 2013-14 school year.

Ariela Keysar, associate research professor at Trinity College, has said the anti-Semitism experienced by Jewish students face today comes in the form of “traditional prejudice” as well as a “new political anti-Semitism.”

This “new political anti-Semitism” is a brand that has been perpetuated by the controversial Boycott, Divestment and Sanctions movement, which seeks to pull funds from companies invested in the Israeli-Palestinian conflict. What makes this new political anti-Semitism unique is that it toes the difficult line between criticism of Israel’s domestic policy and disproportionate demonization of Israel and its inhabitants.

It comes as no coincidence that the anti-Semitic graffiti at UCD came days after the controversial divestment movement passed the school senate. It also comes as no coincidence that the anti-Semitic posts on Yik Yak came during the divestment movement at SDSU. The BDS movement and new political anti-Semitism often go hand in hand, and to insist that this correlation is non-existent, despite resounding evidence, is socially irresponsible.

Where is the line drawn?

Tina Malka, associate regional director of the Anti-Defamation League, has said there are three “D” indicators of when criticism of Israeli policy crosses into nefarious anti-Semitism: demonization, de-legitimization and double standards.

Demonization is when Israel is demonized, and when comparisons are made between Israel and Nazi Germany. De-legitimization is questioning Israel’s right to exist as a Jewish state. Double standards are when Israel is held to a disproportionate amount of criticism in comparison to human rights abuses in the surrounding areas. This definition of anti-Semitism comes from the U.S. Government’s definition in relation to criticism of Israel.

Under the context of this definition, the biased and demonizing position divestment took disproportionately criticized Israel without proper historic or social context of the conflict, resulting in its anti-Semitic nature. Using words such as “genocide,” a word originally coined in 1944 by Raphael Lemkin to describe the systematic genocide of six million Jews, to describe the civilian casualties in the Gaza strip further appropriates the Holocaust narrative to make a comparison that is severely offensive. However, one must also not hasten to automatically categorize those who support divestment as anti-Semites.

But, at the same time, divestment as a movement which considers Israel’s existence as a Jewish state to be patently unacceptable in the region is, by very definition, anti-Semitic.

Malka believes the existence of the Yik Yak posts are an example of this criticism of Israeli policy crossing over into anti-Semitism.

“The recent Yik Yak posts are a prime example of the nefarious and sinister tone that seem to be related to the campus climate surrounding the current anti-Israel referendum,” Malka said. “The message [of the posts] is clear, Jews are not wanted and they are invoking one of history’s most infamous architects of the Jewish peoples’ near annihilation in their posts.”

The mere existence of this sentiment, with no condemnation from the administration, is troubling, not just for current students, but future generations who want to call SDSU their home. Ben Delbick, a business accounting freshman, was shocked to see this sentiment as an incoming freshman.

“I’d never think this would happen here, that’s one of the main reasons why I chose this school over other schools — especially UC’s — because I did not hear anything about any anti-Semitism,” Delbick confessed. “Obviously I see it now, and when prospective Jewish students ask me about SDSU, I feel obligated to let them know about the anti-Semitism on campus right now.”

To move beyond these hateful expressions, I am calling on SDSU to join other schools, such as UC Santa Barbra, UC Berkeley and UCLA, in passing resolutions to condemn anti-Semitism and the demonization of Israel on campus. One can have constructive criticism of Israel without resorting to the biased demonization of divestment, and it’s time that SDSU leads the California State University system in being one of the first schools to do so.

In this month of remembrance, it’s time to recognize the existence of anti-Semitic attitudes, Aztecs. These antiquated expressions have no place in the 21st century, nor on our campus. To ensure a safer future for the Jewish community and fellow students who call SDSU home, we must remember, on the day of Yom HaShoah, what happened the last time the world was silent in the face of anti-Semitism.